Beginning with “My name is…” as that other guilty pleasure also starring Milla Jovovich (Resident Evil), “Ultraviolet” is hated by many critics and viewers alike, but it does hold a special place in some hearts, as this very entry proves.

Its main character, Violet Song Jat Shariff, is a former subject of degrading experiments and one of the insurgent “hemophages” – the humans infected by a virus which causes vampire-like symptoms. As luck would have it, she converts with only a mild sensitivity to light and, after the escape from a forced life of a guinea pig, turns into a seemingly coldblooded operative of the resistance movement.

The victimized-and-misanthropic-tough-girl cover is blown with the appearance of a special boy, Six (Cameron Bright), who reignites her desire for a family which she lost to the disease. Bound by revenge and guided by maternal instincts, she defies gravity and changes her hair and clothes’ colors according to her mood and/or situation, on the thorny road to final victory. 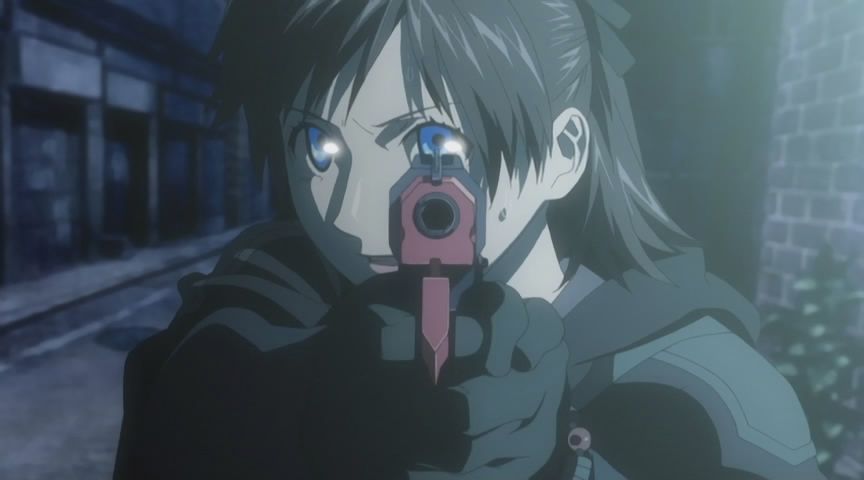 During the day, Monaka Noguchi (voiced by Marina Inoue) is a nerdy and clumsy schoolgirl, doing her best to get excellent grades, listening to some squeaky J-pop and chatting about boys with her friends. Now and then, she lies on the school roof and watches the sky, thinking about her father Orudo who works on the International Space Station and sends her cool birthday presents, such as a bracelet made of rocks from Mars.

Being motherless, she has to stay at her uncle’s house, but doesn’t want him “to keep paying for her living expenses and tuition”, so she accepts a part-time job as a waitress in a shady diner-bar.

But, that’s not all – after hours, she turns into a ruthless pro-assassin-vigilante called “Angel of Death”, because her calling card is a flurry of white feathers. Following the radiation incident involving her daddy, Monaka’s double life becomes even more complicated and dangerous, as she has to deal with a real monster from the ISS.

In spite of being the fetishized lead of an overloaded story ending on a cliffhanger, Miss Noguchi – the paragon of self-reliance – is one of the most intriguing heroines on this list. 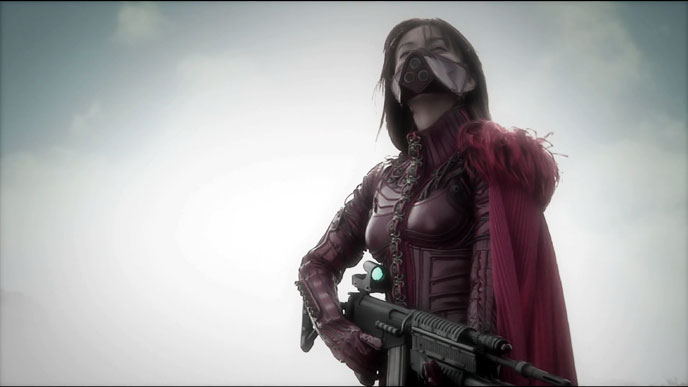 A few more girls with (heavy) guns come with Mamoru Oshii’s self-reflexive and delightfully silly annex to the acclaimed SF-drama “Avalon”. The pseudo-documentary prologue in “photo-roman” style introduces the said film’s advanced version of a virtual combat game, Avalon(f), which brings together four class-A players – a vagabond-type man, Jäger, and three women, Gray, Colonel and Lucifer, who, according to their tight, beautifully designed costumes, take RPG quite seriously.

They battle against giant sand whales in a vast wasteland where a Stonehenge-like structure (with a huge digital sphere spinning above it) probably stands as a checkpoint. In order to defeat the boss (and add another achievement that equals Pi times gazillion to the hedonistic emptiness), they have to overcome their differences and join forces.

The most interesting amongst these “avatars” is Lucifer (played by Rinko Kikuchi) who seems to be having a whale of a time (pun intended), dancing around when not transformed into a laser-shooting raven.

Nothing is revealed about her nor any other character’s background and yet, that very aura of mystery surrounding her is somewhat bewitching (maybe, it’s her pseudonym?). She stands out as the only one who croaks instead of speaking (EngRish) and wears inappropriate accessories instead of a muzzle-shaped mask.

Rachel Talalay and Zack Snyder must have a similar taste in music, given that Björk’s hit “Army of Me” can be heard in her “Tank Girl”, as well as in his “Sucker Punch”, symbolizing girl power. The latter feature is debatable, though, as the feminist undertones are not clearly discernible through the veil(s) of provocative hyper-fantasy which looks like some fanboy’s wet dream.

Waking up your inner 15-yo adolescent and containing everything but the kitchen sink, Snyder’s heavily stylized romp puts the endearing Emily Browning in the role of a young girl referred to as Babydoll who gets institutionalized by her abusive step-father. Once in the mental asylum run by a misogynist, she retreats into a double-layered alternative reality which works both as a critique of women objectification in pop-culture and its total opposite.

At first afraid (and petrified), Babydoll comes up with an escape plan which, on the first level of her fancy, involves a seedy burlesque club where she becomes the main attraction. Her mesmerizing dance act is never shown, since she enters another world in which she has to fight against samurais with Gatling guns and fire-breathing dragons, inter alia. While overcoming her fears and trying to keep her sanity, she looks pretty much like a cutie from some Japanese anime artist’s mind. 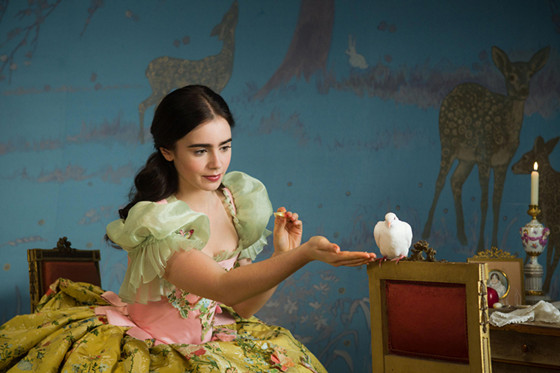 Sporting bold eyebrows that complement her unconventional beauty, Lily Collins is one of the most memorable silver screen Snow Whites. In Tarsem Singh’s lavish, family-friendly version that takes us back to our childhood, she has the honor of wearing the gorgeous, richly detailed, symmetrically extravagant and eccentrically elegant dresses designed by the late Eiko Ishioka.

Painstakingly sewn in those (and the rest of the female cast’s attires) are symbolic meanings which speak a lot about the protagonist’s (good-natured) personality. Initially, she is depicted as a timid child of nature, with a feminine gown adorned with flowers, butterflies and hummingbirds. On her first (costume) ball, she’s disguised as a swan whose wings indicate her desire for freedom, beyond the queen’s (Julia Roberts) reach.

During her sojourn at dwarves’ crib, she puts a pair of pants on and adopts a few dirty tricks from her hosts, turning into a Robin Hood-like outlaw who battles against the “enchanted emissaries”. Eventually, her wedding dress with a huge tie on her back turns her into a “gift” for the prince and the audience. But, don’t get this label wrong, as Collins and Tarsem’s Snow “steals” the first kiss, saves her love interest from a spell and doesn’t fall for the apple trick. 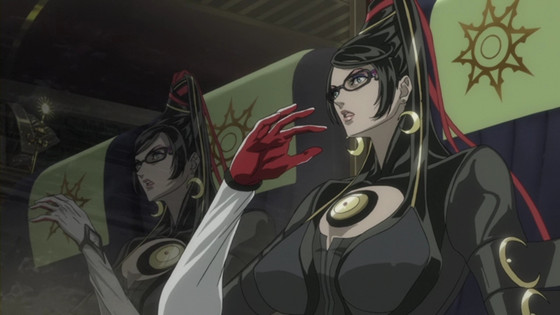 Atsuko Tanaka of “Ghost in the Shell” fame lends her sultry voice to the titular heroine of the best video game adaptation in recent memory. A forbidden child of light (that is not quite light) and darkness (that is not quite dark), as we learn in the highly stylized stained-glass prologue, Bayonetta is a descendent of a Lumen sage and Umbra witch. Raised as the latter and having no memory of her past, she hunts and destroys monstrous angels who are a part of the scheme to bring about the apocalypse by awaking an ancient deity, Jubileus.

Disturbing the balance of eternally conflicted forces with her every step, Bayonetta breaks the laws of physics and embodies insolently exploitative fan-service which gives a whole new meaning to parody and self-irony. Her struggle with the heavenly creatures is depicted as an obscene, thrilling and flamboyant camp-spectacle, while her overemphasized sex appeal (that she’s completely aware of and not afraid to use) is utilized as a booby trap (pun intended!) for her opponents, whether in a simple conversation or during the mind-blowing action scenes.

Bayonetta’s seductive poses, from lollipop sucking to walking around in a see-through negligee are transformed into a tongue-in-the-cheek running gag. She is a bad girl with good intentions who’s fond of chaos, because she thinks there’s no fun “in creating a world where you get your own way”. On top of that, she gets to meet her maker in the most ecstatic fashion possible. 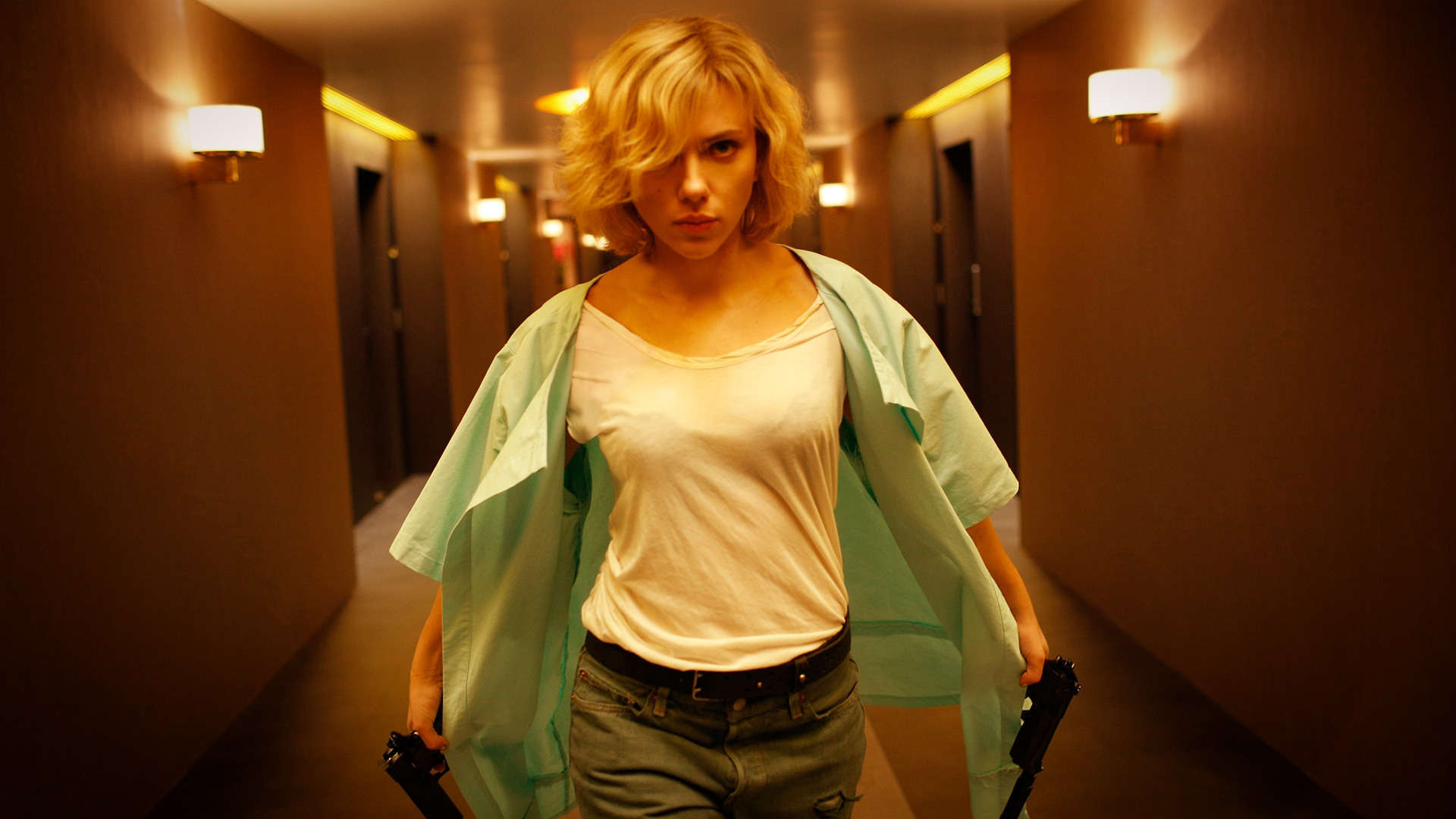 Based on the 10% of the brain myth, “Lucy” is a ridiculously fun take on a superhero movie in which an ordinary student, Lucy (the reliable Scarlett Johansson), “discovers her inner Shiva”, as Abhimanyu Das puts it in his review for Slant Magazine.

After getting involuntarily involved in her short-lived boyfriend’s criminal activities, she becomes a drug mule for the South Korean mobsters. A simple accident releases a large quantity of the carried substance (CPH4) into her system and as a result, she goes from being a scared antelope surrounded by hungry cheetahs into a full-fledged, time-and-death-defying, tech wizard goddess.

By acquiring seemingly awesome “superpowers”, i.e. enhanced mental and physical capabilities, she loses emotions and some parts of the moral compass, but in return starts to feel everything from air, through gravity and all the way to her brain. Remembering her prenatal days and accumulating knowledge at hyper-speed, she gets to taste (bittersweet) perfection and then, to rise above it. Lucy is all the heroines ever in one and much more.