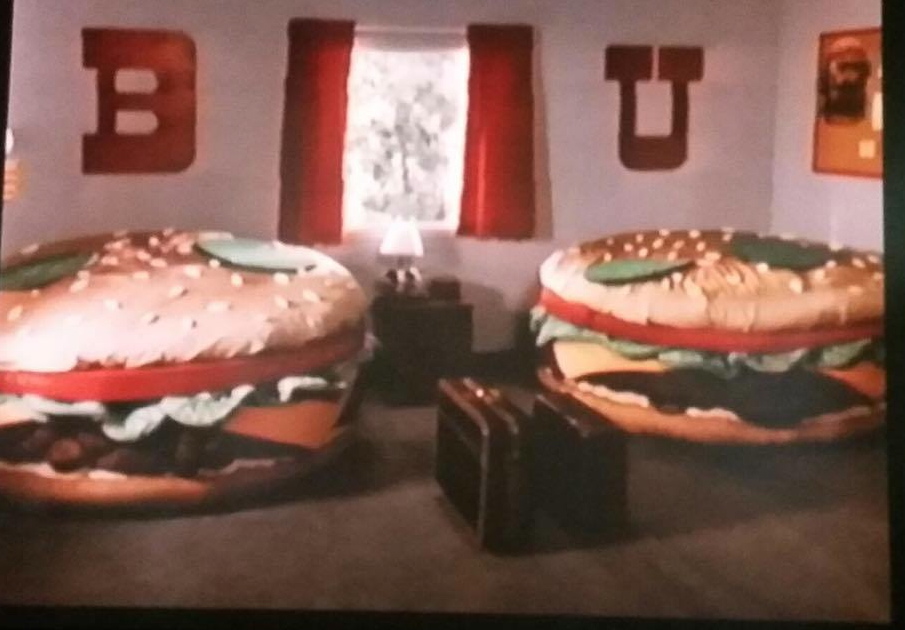 Possibly the weirdest American sex comedy of its decade, Hamburger: The Motion Picture exists all by itself in a dark, forgotten corner of filmdom. It tells the story of struggling college student Russell Proco, a heartbreaker with a ravenous libido that seriously detracts from his grade point average.

Determined to earn his degree the easy way, Russell decides to attend Busterburger University, a fast-food college that trains armies of store managers and patty-flippers. At Busterburger, beds are shaped like hamburgers (complete with cheese quilt and gherkin pillow) and the curriculum typically involves deep-friers.

One particularly ludicrous course informs students how to operate a sandwich assembly line, only it’s run by some kind of robot apparatus that apparently renders human involvement unnecessary. Pupils live under the watchful eye of a drill sergeant-type named Drootin (Dick Butkus, former linebacker for the Chicago Bears); rule-breakers are verbally humiliated by Drootin and/or placed in a giant plastic pickle and coated in ‘torture sauce’.

What it essentially boils down to is the story of a young nymphomaniac attending burger school while trying to simultaneously overcome his carnal impulses and avoid the wrath of an ex-pro football player. The student body is a diverse cross-section of 80’s comedy stock characters: fat guy, cool guy, streetwise rapper, nerd, nymphette, most of them behaving exactly like you’d expect. It’s the bizarre, hyper-sexual, consumer-culture environment of Hamburger that truly defies expectations, not just the characters who inhabit it.

Hamburger: The Motion Picture has a junior-high sense of humor and its idea of sexuality is even less developed, but it’s just so damn odd. When people use the phrase, “They don’t make ‘em like they used to”, they’re talking about Hamburger, even if they don’t realize it. You can’t turn away, find yourself trying to justify its existence, explain its origins.

After witnessing neatly arranged rows of B.U. alumni, dressed entirely in red and practically goose-stepping across the screen, one might even be tempted to believe there’s a subversive agenda at play (this is highly improbable). Somehow Hamburger manages to perversely fascinate in this way for every one of its eighty-six minutes, causing the viewer to cringe, laugh, and ponder the vast nothingness of existence all at once. 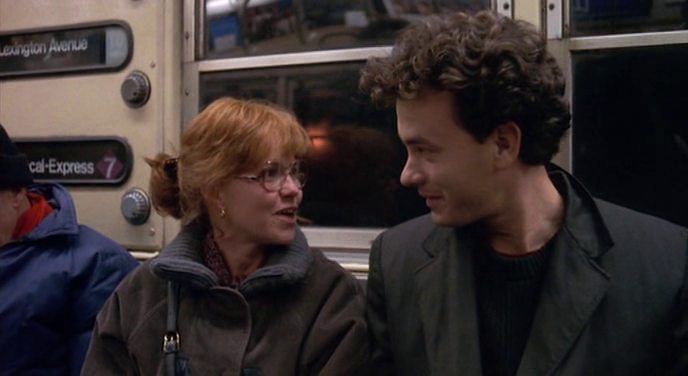 David Seltzer’s brilliant film Punchline has been perpetually misrepresented since it emerged; even a recent Blu-ray release packages the film like a syrupy rom-com. In reality this is an intelligent dark comedy about struggling artists trying to find their place in the world, a uniquely insightful glimpse into the lives of stand-up comedians.

Tom Hanks portrays Steven Gold, a comic existing on the fringes of poverty in New York City. He excels on the stage but seriously lacks as a med student, living in constant fear of a domineering father who pays his tuition fees from afar. Along with a regular crew of aspiring comedians like himself, Steven spends much of his time at a comedy club called The Gas Station. He covets fame and adoration, but deals poorly with pressure and has an unfortunate tendency to bite the hand that feeds.

Enter Lilah Krystick (Sally Field), a suburban wife and mother who has decided to pursue her lifelong dream of being a comedienne, torn between devotion to her family and a burning passion for comedy. Lilah approaches Steven in the interest of purchasing material for her act, and the two gradually develop a tumultuous friendship against this backdrop of cigarette smoke and flop sweat.

Punchline continually surprises by never following any kind of predictable pattern. The picture possesses an uncompromising faithfulness to the beats and rhythms of real life, is utterly devoid of cliches, stock characters, and formulaic plotting.

By remaining firmly grounded in reality, Punchline never fails to defy expectations. Even when the relationship between Steven and Lilah threatens to grow romantic, writer/director Seltzer (author of The Omen) plays his cards just right and doesn’t lose focus of what the picture is about. He strenuously avoids schmaltzy sentimentality; everything occurs just as it would in life, and his film is all the better for it.

The thrill of evoking laughter from others, the agony of bombing in front of an audience, the pleasure derived from hearing a good joke – Punchline focuses on the subject of comedy with an unusual amount of thoughtfulness and grace. Hanks and Field are stellar and John Goodman excels in the small role of Lilah’s husband, a believable, three-dimensional character who, in any other film, would have almost certainly been a domineering lout.

A bevy of familiar faces rounds out the supporting cast: Damon Wayans, Taylor Negron, Barry Sobel, Paul Mazursky, Mark Rydell. It would have benefitted from a stronger musical score, but overall Punchline hits the mark with resounding success. One of the decade’s most criminally underrated films. 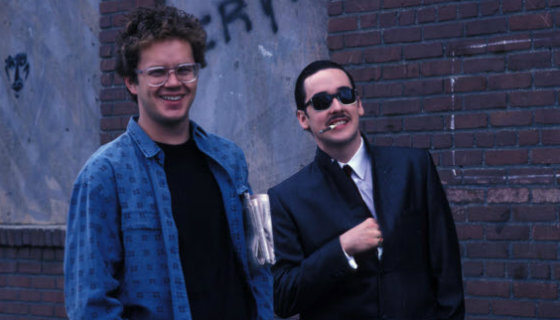 Ivan (John Cusack) and Josh (Tim Robbins) are two lifelong friends who have just lost their respectable jobs as night watchmen. Honing in on natural abilities – Josh is a wiz with editing equipment and Ivan possesses a salesman’s spirit – the pair decides to form a production company, Video Aces. They start out small, funerals and weddings, eventually graduating to producing full-blown music videos for a variety of established acts.

Ivan and Josh experience the ups and downs of success as Video Aces blossoms into a viable commodity, and they get caught up in a nasty blackmailing scandal to boot.

In addition to serving as a nifty time capsule, Tapeheads is blessed with a strong script and two highly charismatic leads, both on the brink of massive stardom. While much of the movie has aged awkwardly, this only adds to the enjoyment and its sense of humor still holds up well for the right reasons.

It was produced by Michael Nesmith (formerly of The Monkees) who also served as executive producer on Alex Cox’s Repo Man four years earlier. Repo Man and Tapeheads make for a perfect double bill: both were produced by Nesmith and are set in industrial Downtown LA, both deal with upstart young men entering unfamiliar professional territory.

Repo Man cast The Circle Jerks as a lounge band, and in Tapeheads we’re treated to Fishbone playing synth-country tunes. Laughs are genuine, the characters likable, the music is great; Tapeheads is pure joy from start to finish.

Most comedies serve a basic function: they evoke laughter, and we rarely expect more. Vampires Kiss offers countless laughs, genuine artistry, and a script that any mental health professional could have a field day with. As comedies go, this is a full meal complete with dessert.

Nicolas Cage (in a performance that has to rank as one of the ballsiest in film history) plays Peter Loew, a tightly wound New York literary agent. Peter lives alone in a posh apartment, visits his therapist once per week, and earns a robust salary while regularly tormenting young secretary Alva (Maria Conchita Alonso). He also frequents nightclubs to unwind, no stranger to drunken pick-up lines and one-night stands.

Out socializing one evening he meets seductive redhead Rachel (Jennifer Beals), seemingly just another female conquest; they wind up back at Peter’s place where this woman, mid-coitus, sinks her teeth into his neck.

Convinced that he’s been bitten by a vampire and is now becoming one himself, Peter’s life crumbles: work suffers, hygiene worsens, hallucinations occur with growing intensity, and his harassment of poor Alva becomes increasingly hostile. When Peter begins to experience cravings for blood, his erratic behavior grows physically violent and things take a turn for the worse.

Vampire’s Kiss sounds like a “reality-vs-fantasy” head-trip film, but writer Joseph Minion (After Hours) doesn’t hide the fact that Peter is experiencing extreme delusions with a gothic twist. Loew’s vampire-like behavior is clearly just a compendium of things he’s seen in old horror movies (he wears cheap plastic fangs and turns his leather sofa upside-down to create a makeshift coffin).

You’ve never seen anything like Nicolas Cage’s unhinged, genuinely demented performance in Vampire’s Kiss. His facial expressions, body language, and (especially) manner of speaking are profoundly unorthodox; he’s undeniably hilarious here. No other thespian on earth would have attempted this role in such a way, as no human being has ever behaved or spoken like Peter Loew.

Without Cage’s presence, Vampire’s Kiss wouldn’t be nearly as memorable and almost definitely couldn’t be labeled a comedy. As it stands, he’s in almost every frame of the movie and his insane performance elevates it to the level of a comedy classic. This was the debut feature from Robert Bierman, a British director with only one other film under his belt (1997’s A Merry War with Richard E. Grant), and he handles Minion’s clever script with elegance, care.

The score, from Colin Towns, emphasizes the stories more serious aspects: dark, swirling strings and moody synths, urban vampire jazz. In fact, nearly everything about this film is played straight, save for its main character. It’s a hilariously twisted story of urban alienation that defies easy categorization, but Vampire’s Kiss offers more laughs than anything else thanks to Mr. Cage’s psychotic interpretation of his role. 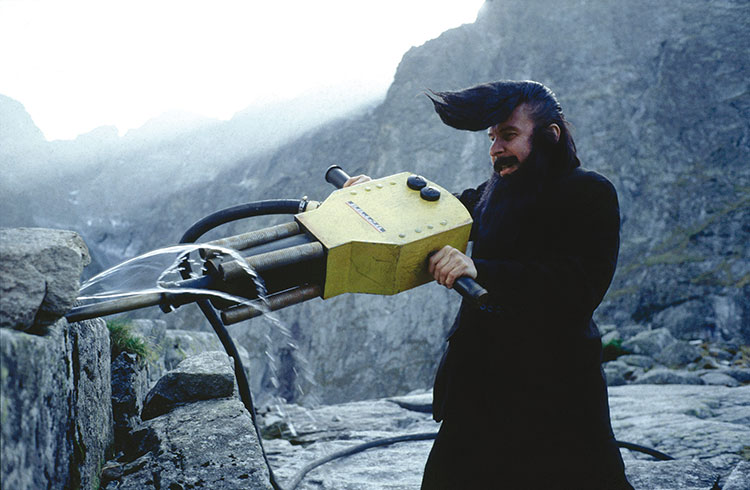 A feel-good comedy/musical/road movie, Leningrad Cowboys Go America details the struggles of a band from Russia attempting to find success in the United States. The Leningrad Cowboys dress identically and seldom speak, favoring a communal lifestyle over individual personality. They also share a profoundly outlandish hairstyle.

Along with a greedy manager and the frozen corpse of their former bass player, the Cowboys travel across the country on their way to a gig in Mexico; gradually their sound takes on Western elements as they attempt to attract American listeners. Leningrad Cowboys is kind-hearted to its core, possessing an unfailingly positive point-of-view while remaining (much like the Cowboys) stoic and deadpan in its approach.

Director Aki Kaurismaki handles the material with a brisk efficiency and his film never wastes a single one of its seventy-eight minutes. In the style of indie filmmaker Jim Jarmusch (who has a cameo), Kaurismaki allows the viewer to choose what they observe within the frame by relying heavily on master shots. His off-beat view of America leans towards the mundane and commonplace. Rather than having the Cowboys visit famous cities and landmarks, the film instead focuses on strip malls, gas stations, poor suburban neighborhoods.

As this is the story of a rock band, several live performance scenes are scattered throughout the picture and they’re quite well handled. The fictional band is made up of actual musicians who lend the musical sequences proper authenticity; not to mention, seeing this ridiculous-looking outfit playing for the patrons of a redneck dive bar amuses to no end. Immensely hard to dislike, Leningrad Cowboys Go America is a modest, timeless classic. A sequel, Leningrad Cowboys Meet Moses, was released in 1994.