No movie will make you appreciate what you have like a War drama. In comparison to what the victims of war have lost and experienced our problems don’t stand a chance to be deemed as big. The Pianist is one of such movies. Set during the times of the Holocaust, the plot follows the true story of Polish-Jew and pianist Wladyslaw Szpilman (Adrien Brody) as he experiences the invasion of Poland by the Nazis.

The years go on in his Nazi invaded country, and the conditions for him and his family get worse as they banned from owning businesses and then along with other Jews are crammed into the Warsaw ghettos where they are treated horrendously by the soldiers.

In 1942 they are transported to an extermination camp, and it is at this point that Szpilman’s musical skills save him from death, as he becomes separated from his family by a he is recognised by one of the officials. The plot then follows him as a labourer before he escapes into hiding and continues his run until the end of the war.

This thrilling story will make one reconsider what is important in life, after seeing someone lose it all to the War, and make you grateful that we are not living in such awful times. 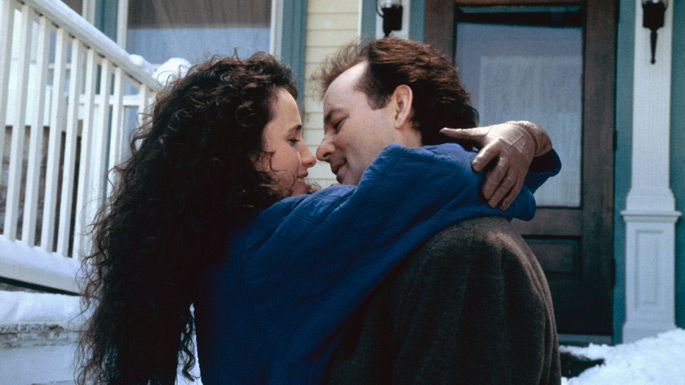 Very often we are put into a situation that we can not escape – no matter how hard we try changing it is out of our hands. Many of us would simply give up, or complain that things just aren’t going right with the most defeatist attitude. And this is exactly what Phil (Bill Murray) does in Groundhog Day; at first at least, until he realises that the awful circumstances could in fact result in something positive as he takes matters into his own hands making him appreciate what he is given.

Phil is a snobby, selfish and slightly rude weatherman who after being out with his small crew to film the ceremony on Groundhog day, finds himself trapped in a time loop of waking up on this same day. At first he acts like most of us would – the repetition becomes unbearable and he begins to try to find ways of escaping this horrendous reality by being reckless and even committing suicide, only to find himself awakening on the same day.

As the repetitive day continues, Phil slowly comes to the realisation that perhaps he shouldn’t try to escape it but rather embrace the opportunities he is given – the opportunity to become a hero to himself by saving citizens from the troubles he has learnt will occur, at the same time appreciating the people close to him – his camera man to whom he had previously acted horrible to and his assistant with whom as the day goes on, he begins to fall in love with.

Groundhog Day will definitely teach you a lesson about appreciation, and inspire you to be kind and giving, making you value all the goods of your life.

It’s a Wonderful Life remains a classic movie for all ages for several reasons, the most dominant one being its kind and inspirational message that will help any stranded individual appreciate what they have in this life.

The protagonist, George Bailey (Jimmy Stewart) is a kind, hard working man who tries to do good and help to build and maintain his small town that is constantly under attack by a rich and powerful individual who is trying to put the folk’s money in his own pocket. After facing numerous obstacles and challenges, he becomes put down and believes that the world and people around him will do better without his presence.

This is where a miracle happens as an angel comes along to show Bailey exactly what he is wishing for as he introduces him to a world where he hadn’t existed, displaying to him the dark consequences of his absence not only for the people close to him but for the whole town.

This forces Bailey to accept the current circumstances and to grasp hold of life by appreciating everything he has – everything that he nearly gave up on, teaching us all to look past the negative things in our lives and instead focus on everything good before it is too late.

If a father being put into a concentration camp with his young son, during the second world war can continue to joke and smile while looking on the bright side of life, then there is no excuse for us to give up and stop appreciating what we have.

In this beautiful Italian drama, the comedy is divided into two sections. The first is bound to leave you in stitches as we follow the charismatic Guido (Roberto Benigni) as he falls in love and tries to win over the young and beautiful Dora (Nicoletta Braschi).

The second half of the movie maintains its heart-warming humour, despite the much darker setting, as we are thrust forward in time, a few years later to World War II, where we follow the protagonist’s separation with Dora, with whom he is now married, as he and his son are captured and placed into a concentration camp due to being Jewish.

In order to protect his son from the harsh reality, Guido takes it upon himself to create an alternate reality for them by creating a game out of the rules of the camp, making the boy believe that they are not in fact in great danger under the Nazi rule.

His positive outlook and humoristic approach despite the tragedy of the situation is what helps his son survive, and serves as a lesson to us all to appreciate what we have and never lose hope when times get rough.

Forrest Gump is probably one of the most optimistic characters in Hollywood that will inspire anyone who sees him. Going through life with a lower than average IQ, Forrest (Tom Hanks) unknowingly overcomes many of life’s hardships, accomplishing great things: he becomes a football celebrity in college, a hero of war and even a father.

The story follows him through his many great achievements that give him a full life everyone, except for his mother though he could never have. Apart from the story itself, Gump gives us an honest look on life, with no unnecessary exaggeration – just things as they are, encouraging us to look at things in a more simplistic and realistic matter and learn a thing or two from this kind and honourable character that only focuses on the good in the world; and indeed if we open our eyes, there is so much goodness that we forget about or simply let the negativity override.