Roderick Usher believes that his family is cursed with a madness that cannot be cured. He is so convinced of this that when Madeline, his sister, announces that she is engaged to be married, he tries everything in his power to stop it and to keep their bloodline from continuing.

Based on the book by Edgar Allan Poe, the movie succeeds as a gothic horror. Vincent Price gives a commanding performance as Roderick Usher, in his first of numerous collaborations with director Roger Corman. Mark Damon also performs exemplary as the fiancé who opposes Roderick at every turn.

16. Village of the Damned

The peaceful residents of the sleepy village of Midwich suddenly and inexplicably fall asleep for several hours. They soon discover that every woman of childbearing age has become pregnant. All their children are born at the same time. They quickly grow into blonde-haired telepaths who have a number of inexplicable powers.

The movie might have lost some of its scary factor. However, it still has one of the most effective openings you’ll ever see in a horror movie. And the ending, which pushed the boundaries of those days, is anything but formulaic.

Kwaidan, or “Ghost Stories” in English, is one of the most effective horror anthologies of all time. It is based on four stories by the Greek-born writer, Lafcadio Hearn, which are in turn based on Japanese folk tales.

In the first story, “Black Hair”, a penniless samurai abandons his wife and marries a princess for a life of wealth. He returns years later with his wife and makes a horrific discovery. In the second story, “The Woman from the Snow”, two men find refuge during a snowstorm in an abandoned hut. A snow witch shows up and kills one of the men, but spares the other.

Years later, the man learns the cost of his life being spared. In “Hoichi the Earless”, the ghost of a samurai asks a blind musician to play for an audience of ghosts. In “A Cup of Tea”, a samurai is constantly haunted by the image of another warrior reflected in his tea.

Carol is a beautiful yet shy manicurist. When her roommate leaves her alone in her flat for a few days, she withdraws into the apartment and starts to experience scary hallucinations; her fear slowly descends into madness.

Roman Polanski’s first English-language film is a damn good one. He cleverly uses sound to make the viewer picture what’s going on off-screen, which makes the scenes more effectively than if he actually showed the source of the sounds. The first of his “apartment trilogy”, Repulsion is a near-perfect psychological horror.

13. The Pit and the Pendulum

Francis’ sister Elizabeth has died under mysterious circumstances when she’s at the prime of her life, and he goes to investigate. Her husband, Nicholas, and doctor both give conflicting opinions about what happened to her. Francis soon learns that Nicholas’ mother was buried alive, and he starts to wonder if the same thing happened to his sister.

The Pit and the Pendulum is a loose adaptation of Edgar Allan Poe’s own work, but it still works. The atmosphere is chilling, the sets are colorful and the ending is among the most iconic, not to mention shocking. Roger Corman tried his best to make a horrifying movie, and he largely succeeded.

Dr. Génessier causes an accident that badly disfigures his daughter. Wracked with guilt, he tries to make things right by kidnapping young women and bringing them to his mansion. There, he puts them under, surgically removes their faces and tries to graft them on to his daughter.

The film is beautifully shot and feels more like a visual poem than an actual motion picture. And it has inspired quite a few movies since, from Faceless to The Skin I Live In. 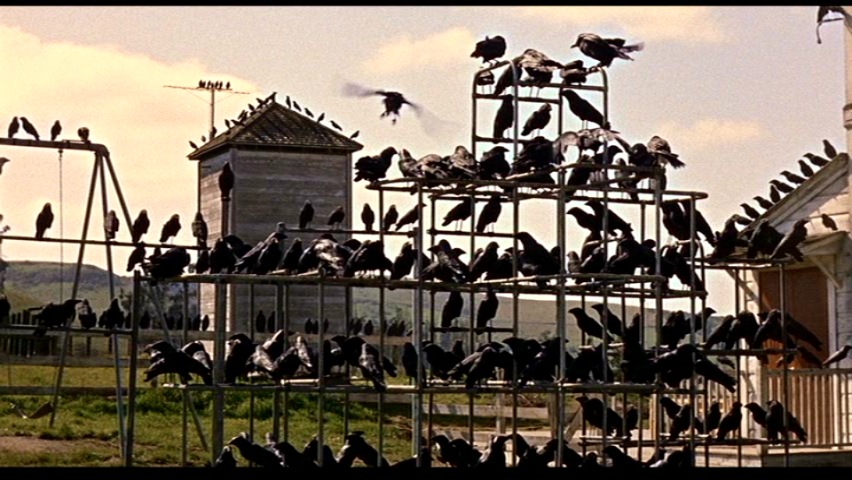 Can an apocalyptic movie about ordinary birds turned murderous really be scary? In the capable hands of Alfred Hitchcock, it certainly can.

Melanie and Mitch meet in a pet store and strike up a romance. She follows him home, bringing two love birds. Soon birds attack the children at Mitch’s sister’s party. The attacks then increase in scale, until no one in the town can safely leave the house.

We never know why the birds have suddenly gone homicidal. But then again, we don’t really need to. Unlike many of today’s horror films, leaving viewers in the dark about some things was a key part of horror back then. And it worked; the suspense added to the intrigue of the movie, and it became even more unsettling as a result.

Mark Lewis is a loner who works as an assistant cameraman at a London film studio. He is also an amateur documentary film-maker, an aspiring filmmaker, and he takes pornographic photos of women part-time. And now he’s started murdering women, capturing their last moments on camera. He watches their murders later to study their reactions.

Peeping Tom ruined its director’s career. Reviews of the film were so scathing that director Michael Powell’s time as a director in the UK effectively ended. However, the film became a cult hit and in recent times modern critics have labeled it a classic.

Peeping Tom, like Hitchcock’s Psycho, is an early slasher movie with a recognizable human villain.

After 1958’s massively successful movie, Hammer Films chose to make a sequel; and they made an excellent one, at that. Christopher Lee once again returns to his role as the titular vampire.

The Kents are English tourists who are warned against visiting Karlsbad. However, they ignore the advice and head there. They make it to the castle and are welcomed by a servant, Klove. That night, Klove murders the man and mixes Dracula’s ashes with his blood. This revives the Count, and his first victim is the second tourist. With this, Dracula resumes his reign of terror.

Dracula: Prince of Darkness is the quintessential Hammer film: it has ample-bossomed beauties, an oppressive atmosphere, literary conceits and more. Hammer never made another Dracula movie as well as this one.