Assistant director turned director James McTeigue brings to life the screenplay of his mentors, the Wachowski’s, with this unforgettable film.

In the late 2020s, V (Hugo Weaving), a masked renegade is fighting the totalitarian regime in the police state of England. After rescuing Evey (Natalie Portman), his backstory starts to unfold and the real revolution begins.

This film has become a cult phenomenon. The Guy Fawkes mask has come to be globally synonymous with an anarchistic ideology.

In V for Vendetta, Hugo Weaving stars in another future dystopian film. This time with a superior role and performance. He isn’t the only one in this cast to have appeared in a earlier dystopian film; ironically, John Hurt, who played Winston Smith in the “1984” adaptation, now portraits the “Big Brother”. 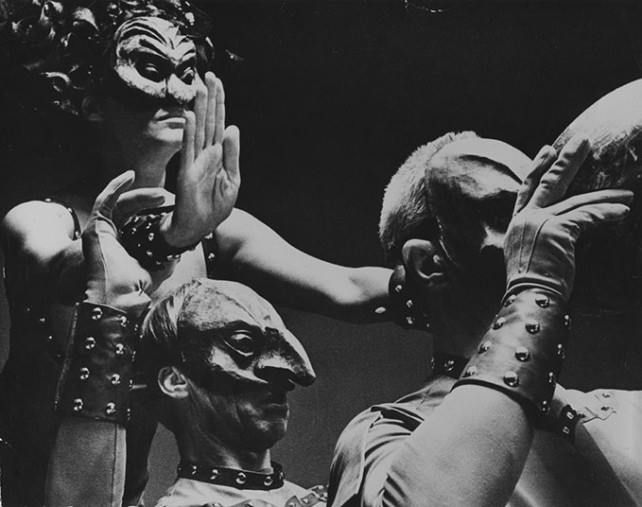 It’s no surprise a lot of Bergman’s gems are forgotten, since he directed so many masterpieces, even some great films of his, can’t be compared to them. Nonetheless, “The Rite” is very important to Bergman’s repertoire, since it’s a “vendetta” film on the critics of his management of the Royal Dramatic Theatre (Yes, even geniuses aren’t immune to criticism).

Narratively told through chapters, much like Jean-Luc Godard’s “Vivre sa Vie”, this film’s aesthetics are beautifully similar to a stage play. The set design is deliberately very theater-esque, reminiscing of Bergman’s masterpiece, “Persona”.

Perfectly acted (as one would expect from some of the greatest actors of the twentieth century), each of the main characters represent one of the three parts of the human psyche, as described by German psychoanalyst, Sigmund Freud. Hans is the super ego, Thea the ego and Sebastian the id. 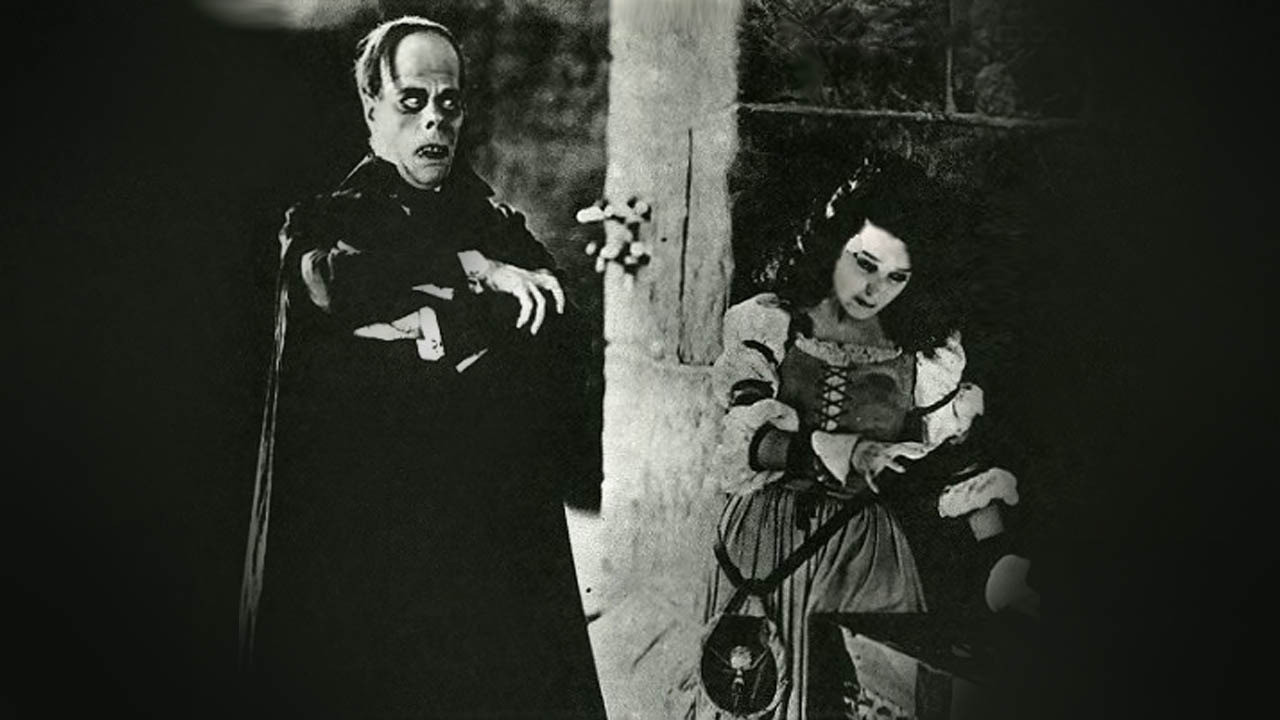 16 years after the release of Gaston Leroux’s novel, “The Phanton of the Opera”, this same named silent adaptation is composed. To much surprise, this wasn’t the first version. In 1916, a German production of the book was released, which is now a lost film. Not even pictures or posters survived.

Christine Daaé (Mary Philbin) has made a sudden rise from the chorus to the understudy of the Prima donna, with the tuition of unknown and mysterious master. Soon, she is captured by her masked admirer (Lon Chaney) who admits his unconditional love for her.

Directed by Rupert Julian, this silent opera, as correctly stated in its own title cards, combines the fantastic with the real; not shying away of marvelously enchanting its audience with a grotesque façade and innermost love. Lon Chaney’s masked persona’s humbly portrayal accomplishes the hard task of making the audience feel his pain and love.

The only more memorable image of the film than Chaney with a mask, is Chaney without a mask. The Make-up department earns highest praise for engraving his disfigured face in the memory of audiences.

Rarely has there been a fourth installment received with so much praise as this George Miller dust opera of madness. Winning 6 Oscars in the technical categories this year, “Fury Road” is Valhalla for the eyes.

With an average of 2 second shot length, this is the entry with the fastest editing on this list. The fast pace of this manifesto fits perfectly to the tone of the mechanical diesel punk world of “Fury Road”. A world where water is a luxury (“which you shouldn’t get addicted to”), infants are breed and bullets are called anti-seeds.

To mise en scene a film like this, you need to be nothing less than a genius, and George Miller is exactly that; a phenomenal cast that includes Charlez Theron and Tom Hardy only adds to this epic experience.

Christopher Nolan’s Batman trilogy not only brought dignity back to “The Capped Crusader”, but it initiated critical and commercial recognition to all comic book movies to follow.

New District Attorney, Harvey Dent (Aaron Eckhart), swore to clean the streets of Gotham from crime. Even Bruce Wayne (Christopher Bale) puts his trust in him. Until, an anarchistic psychopath named Joker (Heath Ledger), that seemed to come from nowhere, enters the scene.

“You either die a hero, or you live long enough to see yourself become the villain.” Heath Ledger played a villain and died like a hero. The most energetic and memorable performance of the 21st century, Heath Ledger’s Joker has so many layers to his maniacal schizophrenic portrayal.

Bale said in a recent interview, “my Batman could never compare to Heath Ledger’s Joker” and he is right; Ledger made this film his circus.

Nolan’s direction is flawless, even though it’s hard to apply the auteur theory to blockbusters, here are clear visual hints of his fingerprint.

Tobe Hopper’s second film is the Kobe strip steak of the slasher subgenre. Contrary to the begging statement of the film, Hoopers “master-feast” is not based on true events. However, Leatherface is based on the infamous Ed Gein, a killer and cannibal, responsible for the death of two girls in the 1950s in Texas.

Sally (Marylin Burns) and her disabled brother Jerry (Allen Danziger) are visiting their grandfathers home, together with 3 friends. While driving there, they are attacked by a deranged hitchhiker they just picked up. Tragically, that is only the beginning of the horror as when they arrive there, they are up for much worse.

Then ass. Prof. Tobe Hooper, made this micro budget film with the help of student actors and other associates from his film school. Watching the film alone, one would never suspect a budget of mere 80,000 dollars. Hooper’s composition, especially the low angle tracking shots imply the image of a more costly production.

Cost limitation can sometime conclude to inventive creative choices, this film is the perfect example of that. The 16mm grit and rusty color palette matches perfectly the tone of the film, while drawing a parallel to the tools of the filmmakers and the killers tools.

Another debut entry on the list, Richard Kelly’s 2001 film is an eerie film. Not quite a “cellar door”, “Donnie Darko” has a monumental cult following.

Donnie Darko (Jake Gyllenhaal), a schizophrenic adolescent, escapes death from a plane propeller crashing into his bedroom by following the calls of a bunny costume wearing hallucination, named Frank. Frank convinces the under therapy boy that the world is going to end in 28 days, and that he has to listen to his orders.

“Donnie Darko” embodies surreal filmmaking depending on existentialist philosophy. This film uses deus ex machina as a meta element to convince its hyper-realistic main character of meaning in a absurd world.

In the Director’s Cut version, there is a scene with great importance in explaining the film. When Donnie questions the relevance of the death of rabbits in “Watership Down”, his teacher replies with “Aren’t we forgetting about the miracle of storytelling, the deus ex machina, the god machine. That’s what saved the rabbits.”

When the surreal element that saved him for the sake of the story is removed, he is killed by the deus ex machina, thus, saved from the same fate of Sisyphus Granda Death.