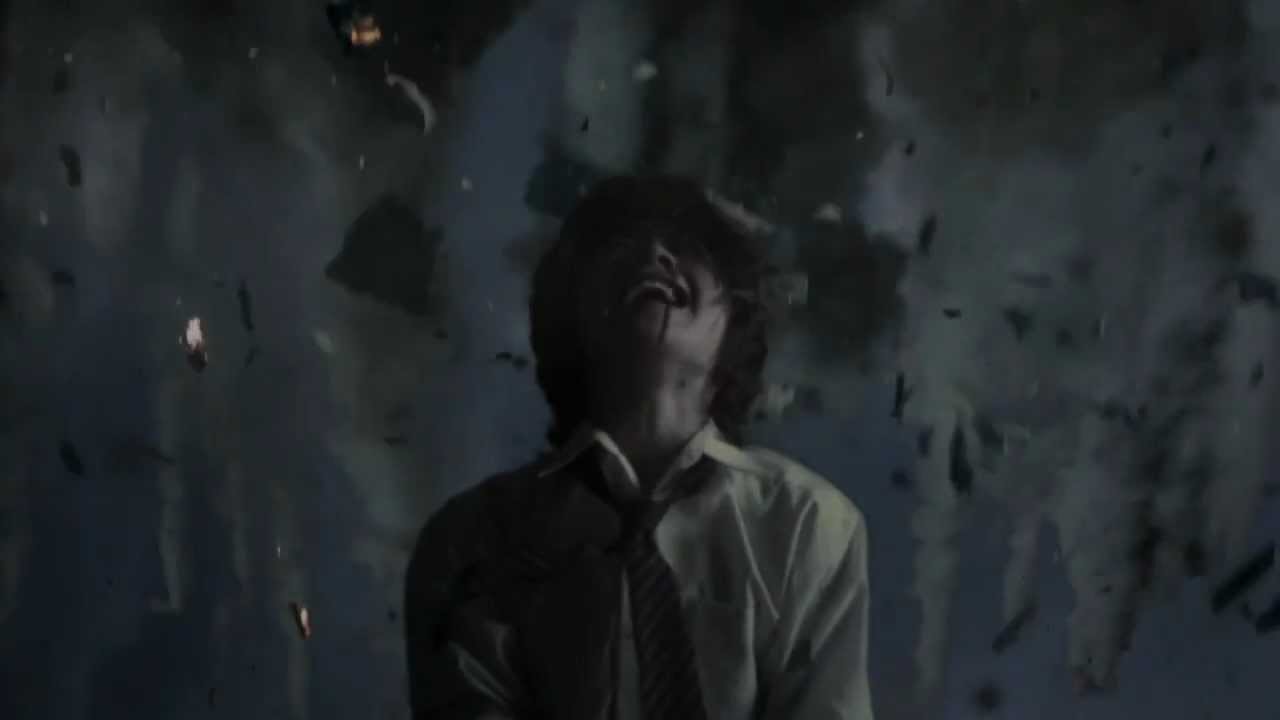 The bomb Shuya has planted in the school explodes; not where he expected it, but in his mother’s lab. As he tries to work out what has happened, he receives a call from Moriguchi, who says that she has relocated the bomb to his mother’s office. She explains that it is her ultimate revenge to let Shuya’s mother die by his own hands, but his redemption would now begin. As the screen darkens, Moriguchi chuckles and says, “just kidding.” This concludes Yuko Moriguchi’s intricate plan of revenge.

As Shuya realizes what has actually happened, another explosion occurs, this time in his mind, as Nakashima presents a cinematographically spectacular scene, both in terms of technique and aesthetics. The scene demonstrates Shuya’s chaotic state of mind in the most elaborate fashion, as it fully justifies Yuko’s extreme revenge. Her last words are a distinct sample of Japanese irony.

7. The torture scene at the end of the film in Audition (Takashi Miike, 1999) 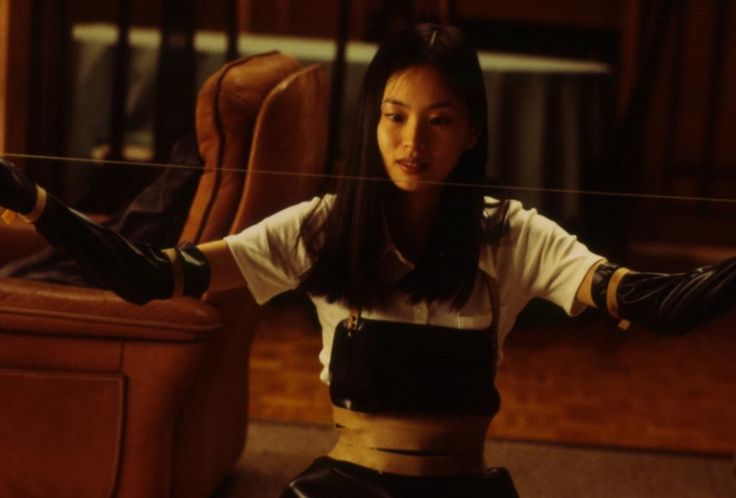 Shigeru finds himself unable to move, as Asami has injected him with a paralytic agent, that still leaves his nerves alert. She then proceeds to torture him with needles, eventually inserting them into his eyes, before she cuts his left foot with piano wire.

The scene is quite shocking, particularly due to the permeating realism that characterizes every grotesque act in it, and the sound, which at times is even more horrible than the images.

The fact that Eihi Shiina looks quite beautiful while she is performing these horrendous acts as Asami, and the general aesthetics of the film, which by no means resembled anything grotesque up to that point, heighten the shocking element even more.

Both the extreme fantasies of Ryu Murakami (who wrote the original novel) and of Miike manifested in this scene in all their glory.

In one of the most notorious scenes in cinematic history, 54 female students jump over the rails of a train station in front of the oncoming vehicle, and bathe the terrified onlookers in blood and body parts.

The fact that the girls are holding hands and move them back and forth in the most childish way, the “goofy” music that is heard at the same time, and their joint cheering right before their mass suicide, make the scene as preposterous as it is onerous.

The horror, however, becomes apparent, through broken glass that shatters due to the pressure of the accumulated blood, the yelling of the crowd in front of the spectacle, and the extravagant bloodbath, which entails a great deal of hyperbole.

Major Kusanagi is on the rooftop of a building. She fully undresses, leaving on just a pair of long white socks and her holster with an armed gun. She then jumps toward the bottom upside down and murders her target through the window of the building. As the rest of the bystanders in the room go toward the window, they watch her disappear in front of their eyes.

“Ghost in the Shell” established anime as a genre that did not apply solely to children, and this scene is probably the reason, with the nudity and the grotesque way the victim is killed.

As it shocked its audiences, the scene also established the cyberpunk category in anime, set the basis for the franchise that still has an enormous international impact, and became one of the most iconic anime sequences ever made.

The special effects are also great, as is the general artistry of the scene, which sets the tone for the rest of the film.

As Ryuji stays at home, his TV switches on by itself, showing the image of a well. The ghost of Sadako crawls out of the well and eventually out of Ryuji’s TV, in an act that terrifies him to the point of suffering from cardiac arrest.

The scene was one of the most terrifying ever to appear in cinema, a fact heightened by the bad quality of the images on TV, the eerie music, the hair that falls on Sadako’s face, her broken nails, and the slow but relentless way she moves towards Ryuji.

As her eye is revealed through her hair, the terror it causes is fully mirrored in Hiroyuki Sanada’s eyes, who is magnificent in this particular scene. “Ringu” actually established the J-horror genre, and this scene is its most iconic and most shocking.

3. Washizu is killed by scores of arrows in Throne Of Blood (Akira Kurosawa, 1957) 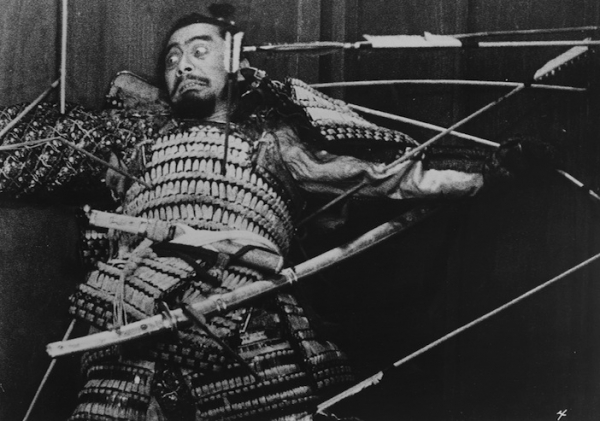 As Washizu tries to get his troops to attack, they turn against him and begin shooting arrows at him, making him even more angry. He moves towards one side of the building to avoid them, and then to the other side, but he cannot find solace anywhere. Many arrows hit their target, but he continues to run until one pierces his neck.

The scene is shocking for two reasons. The first one is that Akira Kurosawa decided to use actual arrows shot at Toshiro Mifune, who played Washizu, in order to create a shocking and truly unforgettable finale.

Mifune was wearing protective boards underneath his uniform, the arrows had long needles attached to their ends (in order to do less damage in case they hit), and they were shot by professional archers. However, the fact remains that the scene was extremely dangerous and Mifune very brave to agree to do it.

The second one derives from the first and is the fact that Mifune managed to portray true terror in its purest form, as this was probably the sentiment he was actually feeling during the scene. The result is magnificent as much as it is shocking, due to the realism of the scene and Mifune’s hysterical facial expressions. 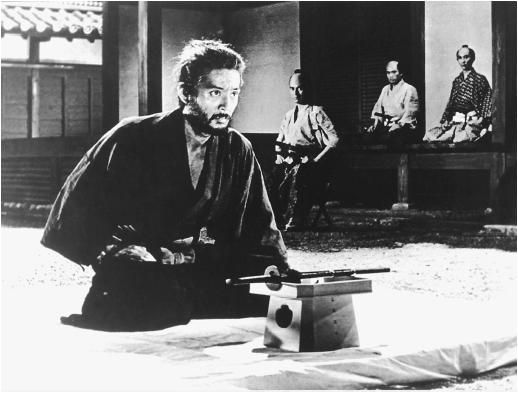 Chijiiwa Motome arrives in front of Saito, the Daimyo’s senior counselor, and states that he wants to commit seppuku. As this request is part of a series of identical, “fake” requests, the three most senior samurai of the clan persuade Saito to order Motome to fulfill his request. However, as Motome’s request was not real, he did not even carry with him a katana, but a bamboo blade. This fact enrages all of the bystanders and finally, Saito orders him to proceed with that specific sword.

The depiction of the harakiri would already be grotesque, but the fact that the sword is wooden makes the act slower and more agonizingly painful, as Motome tries to desperately to penetrate his abdomen with the wooden blade.

Furthermore, the order is deeply humiliating, heightening the shock the scene produces even more. The same applies to the fact that the surrounding samurais watch the act with clear contempt and that Motome’s second, who is supposed to decapitate him in order for him not to suffer extremely, delays on purpose.

The scene’s violence was unprecedented for the time, and that along with the fact that the cherished samurai are depicted as hypocrites truly shocked Japanese audiences.

During an intense sex scene, Sada Abe strangles Kichizo to death, and then severs his penis, placing it in her kimono, before she writes with his blood on his chest “Sada Kichi the two of us forever.”

The fact that Oshima did not pull any punches in the depiction of the amputation, along with the unsimulated sex scenes, made for one of the most shocking films of the decade, particularly due to this specific scene.