A rare for the genre collaboration between Toho and the American UPA, this film is also a unique entry for having a Hollywood actor, Nick Adams, play the protagonist role, alongside Tadao Takashima and Kumi Mizuno.

Nazi scientists in Germany send Frankenstein’s heart to Hiroshima for experimentation, but before the procedure is completed, the Americans drop the atomic bomb in the Island, contaminating the organ. Sometime later, a boy named Sanda finds the heart and eats it, causing him to gradually become a giant.

Two doctors, James Bowen and Sueko Togami trick the boy into joining them in their clinic, where they plan to experiment on him. Eventually, the boy escapes, just as another monster, Baragon, sets about destroying the countryside.

Probably one of the most meaningful films of the genre, “Frankenstein Conquers the World” includes elements of drama and romance between the monster and Kumi Mizuno, issues of morality, and concern for the media’s role. However, the film is not a social drama, and all of the above actually serve as a cause for the actual protagonists, Frankenstein and Baragon, to duel in the final scene of the film.

This scene, along with the one when the A-bomb is dropped and a duel between Frankenstein and a huge octopus, which was featured only in the Japanese cut, are the most memorable. As for the effects, the miniature work is quite good, in contrast to the costumes, which at times fail completely. 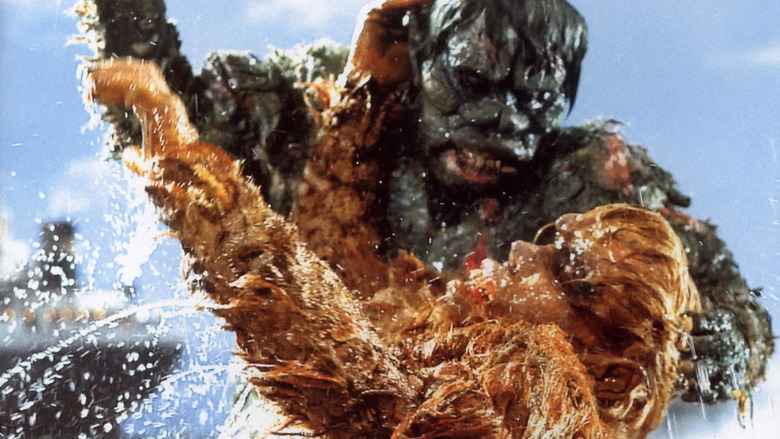 The sequel to the “Frankenstein Conquers the World” was another collaboration between Toho and UPS and featured another Hollywood actor, Russ Tamblyn, alongside Kenji Sahara and Kumi Mizuno, who played a similar role in the first film.

This time Sanda faces his identical twin, who was generated from the hand that was severed from him in the previous film. Sanda initially saves him, but when he learns that his diet mainly consists of human, he turns against him.

The film incorporated some new additions to the kaiju genre, like the scene where Sanda tries to reason with Gaira, and the fact that the two opposing monsters are so similar. New additions were also made by Tsuburaya, who placed holes in the eye sockets of the suits, causing the actor’s eyes to be visible, and thus making the monsters more believable.

The human characters are nothing special, but the acting is quite good, with the sole exception of Tamblyn, who never managed to grow accustomed to his role.

Drawing inspiration from the gigantic sculptures of gods found in the temples in Kyoto, Daiei presented its second kaiju, who featured in three films, all shot the same year.

The treacherous chamberlain Samanosuke manages to kill his lord Hanabusa and his wife, while his sons and daughter narrowly escape with the help of a samurai, and end up residing with the priestess Shinobu. When the boy becomes 18, he decides to overthrow the chamberlain, in a series of events that end up with the priestess murdered. Around that time, Daimajin comes to their help.

The film stands out particularly due to the special effects by Yoshiyuki Kuroda, who used a mixture of stop-action and extremely well-built miniatures with a great monster suit to present the various action scenes. Furthermore, the direction and the cinematography are on a very high level for the genre, in one of the best entries in the category. 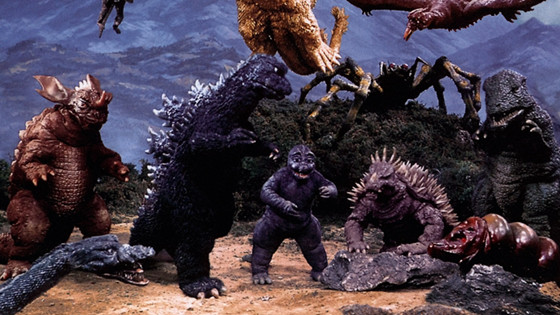 The ninth entry in the original Godzilla series is a true kaiju extravaganza, featuring eleven of Toho’s giant monsters. Furthermore, it was the most expensive production up to that point, since it was considered the final entry.

After the monsters have repeatedly caused huge destruction all over the world, the United Nations have decided to confine them in a secluded area where they are to be studied. However, a female alien race known as Kilaaks manages to take control of the monsters and subsequently send them to destroy cities all over the world, including New York, Beijing, Moscow and Paris.

Eventually, the true plan of Killaaks is revealed, which is to divert attention, in order to establish an underground base in Japan, near Mt Fuji.

This time, the film did not focus so much on the actual monsters, but on the humans desperately trying to save themselves from their combined attack. However, the fight of the Earth monsters against King Ghidorah is impressive, as much as the final one.

The story, though, is preposterous to the point of causing laughter, as with the scene where a TV crew is broadcasting live a battle among the monsters, as if it was a sporting event.

In terms of quality, the film is placed somewhere in the middle of all the installments of the franchise, since despite its nonsensicality and poor special effects, it manages to stay quite entertaining, particularly due to the presence of all those monsters. 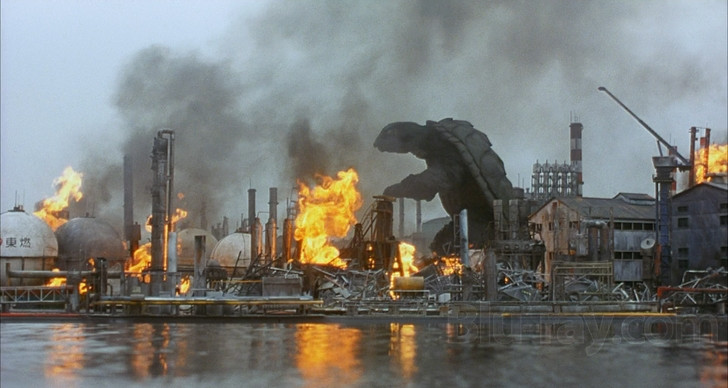 Inspired by the success of Toho’s “Godzilla”, Daiei Studios created their own kaiju named Gamera, who was actually a giant flying turtle. The first film of the franchise that spawned nine titles screened in 1963, with a script that was very close to the one of the original Godzilla films. This one, however, which was produced by Toho after Daiei went out of business, is considered the best of the series.

A team of scientists led by Naoya Kusanagi investigates a floating atoll, where Gamera is eventually revealed to reside. Meanwhile, ornithologist Mayumi Nagamine investigates a village in the Goto Archipelago, where there have been reports of attacks from a giant bird.

The creature is revealed to be a Gyaos, the bat-like creature that was also featured in the previous films. Kusanagi and his daughter, Asagi, along with Nagamine try to persuade the government that the Gyaos are the real threat and that Gamera is there to protect them.

Shusuke Kaneko took the film to a darker and more serious direction, eloquently expressing the Japanese psychology that resulted from the bombings in World War II, and the constant natural catastrophes that occur in the country. The special effects by Shinji Higuchi are impressive, despite again being hand-made models instead of computer graphics. The scene where Gamera fights the Super Gyaos is the one that stands apart.

Lastly, the film also features Ayako Fujitani, the daughter of Steven Seagal, in her onscreen debut. 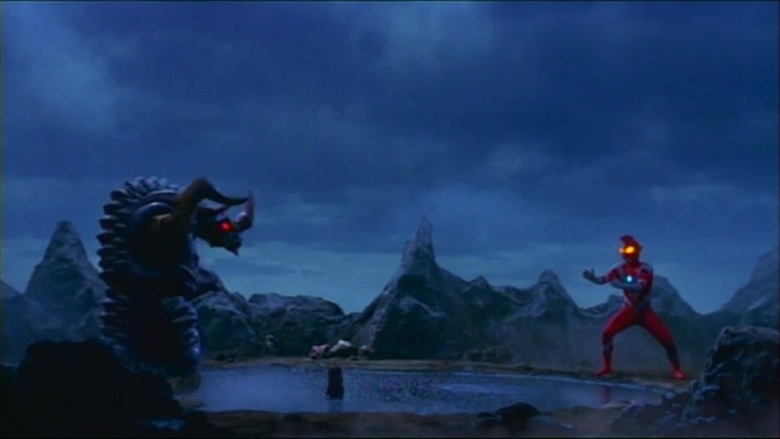 Ultraman is actually a television phenomenon, since it was introduced as a recurring character on the “Ultra Q” TV series in 1966, and was initially intended to be a parody of Superman. Eiji Tsuburaya was the one that created him. Currently, it is a huge franchise that has spawned 29 TV series and 25 films, along with anime series and video games.

This particular film is actually a parody of Ultraman, with the new hero wearing a red mask and having issues with his hygiene. His goal, however, is always the same: to save the world. Currently, he works at a gas station, although he is a secret agent of the Universal Military Association. His main enemy is Alien Benzene, who sends his monster Cottenpoppe to steal gold from Earth, as it is the only medicine for his chronic disease.

The film is as silly as it sounds, a notion that is actually its biggest asset, since the slapstick humor and the preposterous script and characters result in a hilarious film. The movie also introduced the first female Ultraman, with Yuka Takaoka transforming into the legendary crime fighter after using his toothbrush.

Since the list’s focus is on diversity, a parody of the genre could not be missing, with Matsumoto providing a truly “extreme” entry in the genre.

Daisato Masaru is a lonely middle-aged man who lives alone with his cat, forgotten by everybody. However, like his ancestors, he is also Big Man Japan, a superhero who reaches 30 meters by using high voltage electricity. In this capacity, he fights equally humongous monsters that attack Japan.

Nevertheless, in contrast to the fame and acceptance his father and his grandfather received, he is mocked and even cursed upon, due to the large quantities of electricity he uses and the garbage he leaves behind after each fight.
The film presents humanlike-kaiju in the most preposterous fashion, since the monsters in the film are sexually voracious, not to mention the general appearance of the main hero, who usually fights in his underwear.

Furthermore, Matsumoto presents a mockumentary of the everyday life of the Japanese working class, in film that dismantles every notion of seriousness and coherence. 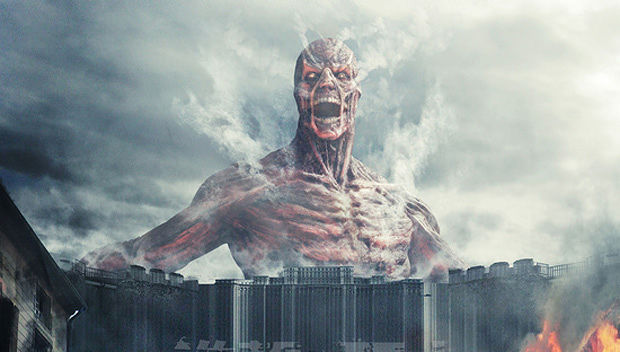 Based on the world-renowned franchise, the live-action edition of “Attack on Titan” was highly anticipated by fans all over the world.

The film takes place in a world where giant humanoid creatures called Titans suddenly appeared and nearly wiped out humanity, devouring them without remorse or reason. What remains of humanity now resides within three enormous concentric walls.

Eren, Armin and Mikasa, frustrated by their constraint inside the wall, decide to secretly break loose. However, as soon as they reach the wall, the Titans reappear, demolishing the outer wall and spreading havoc once again among the citizens. During the attack, Mikasa is separated from the others. The script subsequently moves forward to a few months later, where Eren and Armin have joined the military, training to face the Titans.

Unfortunately, Shinji Higuchi directed a dull film with uninspired characters, only making an effort in the last half hour of its duration. The protagonists, Haruma Miura and Kiko Mizuhara in the roles of Eren and Mikasa, respectively, add to that sense, appearing in order to impress with their looks rather with their acting, a practice common among idols. Due to the general mediocrity, even actors like Jun Kunimura and Pierre Taki fail to deliver their usual standards.

On the other hand, the design and the general depiction of the Titans are quite skillful, with Yoshihiro Nishimura doing an excellent job on them. Additionally, the last part of the film is quite impressive, though not enough to cause one to forget the rest.