Jack Torrance is a recovering alcoholic and a struggling writer. He takes a job as a winter caretaker at the isolated Overlook Hotel to overcome his writers’ block. Jack settles in with his wife, Wendy, and his son, Danny (who has psychic abilities and can see ghosts). A snowstorm soon traps them and Jack gets influenced by visions. He slowly descends into madness and ultimately becomes homicidal.

Spoiler: In the last shot of the film, we see a photograph of Jack in the middle of a crowd dating back to July 4, 1921. Couple it with the point earlier when Jack was told that he’s always been the caretaker, and you wonder: did the hotel reincarnate Jack?

Private detective Harry Angel is hired by Louis Cyphre to Johnny Favorite, an iconic singer who went back on a debt. However, every person he questions about the singer meets a gruesome, ritualistic death. The trail takes him to New Orleans, where he discovers that Favorite was involved in Satanism.

Spoiler: Harry Angel is Johnny Favorite. Favorite had sold his soul to the devil to become successful, but he went back on the deal through a ritual that let him transfer his consciousness into Harry Angel’s body. Angel, however, has amnesia, so the devil uses this to his advantage by manipulating Angel into committing the murders. This way, Angel will get the death sentence and he will finally be forced to die and surrender his soul to the devil.

6. The Cabinet of Dr Caligari

Francis and his friend, Alan, visit Dr. Caligari, a hypnotist who shows a somnambulist, Cesare. When awoken, Alan asks Cesare about his future, and the somnambulist reveals that he will die. Sure enough, Alan dies the next day. Naturally, Francis suspects Dr. Caligari, but the police don’t believe him. He does some digging around and discovers that Dr. Caligari is using Cesare to commit murders, including Alan.

Spoiler: Francis discovers that he is an inmate in an asylum, along with Cesare. Dr. Caligari is the director of the asylum. 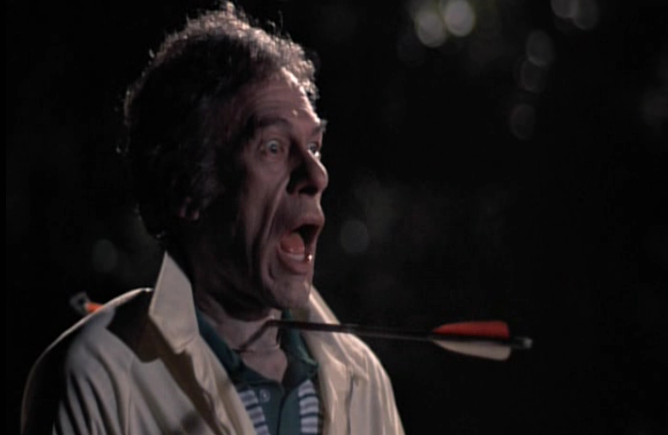 Angela and Ricky are cousins who go to Camp Arawark eight years after a tragic speedboat accident which kills Angela’s brother, Peter. Though Angela is quiet, she falls for the charm of Paul. This makes her the target of Judy, the camp’s queen bee. Things at camp become deadly, though, when a mysterious killer starts offing staff and campers.

Spoiler: The police find Angela holding a hunter’s knife and Paul’s severed head; she’s the killer. And to top it off, she’s not even a girl; she’s actually Peter, the brother everyone thought was dead. In the speedboat accident, it’s Angela who died while Peter survived.

Cole Sear is a troubled boy who is convinced that he can see dead people who have unresolved problems and talk to them. The only person he confides in is Dr Malcolm Crowe, a child psychologist. To Dr Malcolm, Cole resembles a former patient he had; they both have similar problems and experiences. The former patient shot him and claimed that Crowe treated him wrongly, so he hopes he can do it right with Cole.

Spoiler: Crowe discovers that he was dead all along; he was killed by his patient (in the first scene) and all the time he was working with Cole, he had no idea.

The Sixth Sense has clues scattered all over, but unless you’re quite sharp and intuitive, you have to rewatch the movie to find them. The film became an instant success and it’s become incredibly popular because of the ending and the line “I see dead people”.

Sergeant Howie is sent to Summerisle, a small Scottish island, to investigate the disappearance of a child. A righteous man, he is shocked to discover that the residents of the island are openly sexual, libertarian and pagan. Even worse, the residents of the island refuse to admit that the missing girl even exists. The sergeant’s investigation leads him to suspect that the girl’s disappearance is linked to an upcoming festival.

Spoiler: When trying to stop the missing girl from being sacrificed, Sergeant Howie realizes that the missing girl just a lure to get him to the island… where the residents of the island can sacrifice him. They trap him and force him into a giant wicker man and set it (and him) on fire.

This ending turned The Wicker Man from just another Hammer movie into a deserved cult hit. There are clues to the film’s ending, but it’s not easy to predict. And the ending still remains shocking because of how the detective burned to death while the villagers celebrated in song and dance.

Michael Delasalle is an abusive husband and a frugal, sadistic headmaster who makes life unpleasant for both students and teachers. Nicole, a teacher, is fed up. She plans with Michael’s weak-hearted wife, Christina, to murder him. They lure Michael to Nicole’s distant home and drown him in the bathtub. Then they return him to the school and dump him in the swimming pool, hoping that his death will seem like an accident or even suicide. However, Michael’s body vanishes.

Spoiler: Michael’s corpse appears in her bathtub. Then he rises. This gives Christina a heart attack and kills her. We then learn that Michael and Nicole were playing her all along. Michael was playing dead so he could frighten her and, with her weak heart, she would die from shock.

Marion Crane is on the run after she steals $40,000 from her employer. Her dream is to elope with her boyfriend, Sam. During a rainstorm, she stops by Bates Motel, a ramshackle motel in the middle of nowhere. There she meets the likable and polite Norman Bates.

Spoiler: The film has multiple twists: first, the protagonist, Crane, is murdered in the shower after only a third of the film has passed. And finally, we learn that Norman murdered his mother and has been dressing up as her.

When it came out, director Alfred Hitchcock was adamant that people should not start watching it midway through because they would wonder where Janet Leigh (who played Marion Crane) was. He also urged people not to spoil it for others. Nowadays, even those of us who haven’t watched Psycho know at least about the shower scene, and it’s still an effective movie with twists that not grown stale.