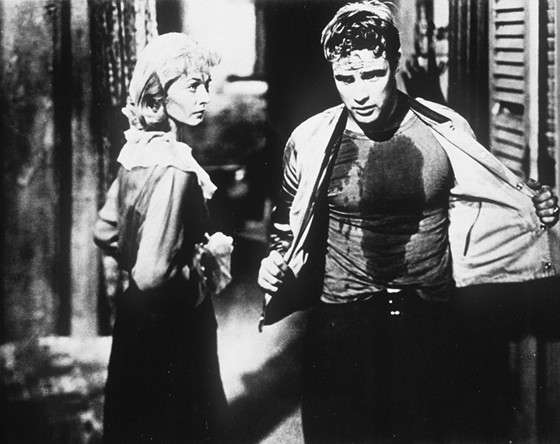 After a successful Broadway run, Elia Kazan adapted Tennessee Williams’s Pulitzer Prize-winning play to the big screen, with the production and cast almost intact. Although the screenplay -in which Kazan collaborated with Williams himself- avoided touching upon the homosexual and nymphomaniac references of the original text, A Streetcar Named Desire still remains one of the most sexually complicated and intense films in history.

The scene his character Stanley encounters his wife’s sister Blanche, iconically performed by Vivien Leigh, brims with underlying sexuality. “He’s like an animal” Blanche will later confess to her sister, concealing “thousands of years” of repressed desires.

Another Roger Vadim entry, this time in full-on sexploitation mode, 1968’s Barbarella is campy sci-fi at its best. The film is based in Jean-Claude Forest’s French adult comic book of the same name, a medium Vadim always wanted to get involved in. Through his heroine’s sexualy liberating character that perfectly conformed with the countercultural zeitgeist of the late sixties, Vadim wanted to dismiss systemic ethics and explore a new, futuristic morality.

Jane Fonda -again, Vadim’s wife at the time- was the ideal embodiment of Barbarella. In the film’s opening titles sequence, she memorably takes off her space suit inside her ship. Creatively shot against a huge piece of glass to replicate the feeling of zero gravity, Fonda strips naked with nothing but the playful credit letters standing between her dazzling body’s details and our voyeuristic eye. The scene alone was enough to boost Fonda’s career and establish Barbarella as a delightful cult classic. 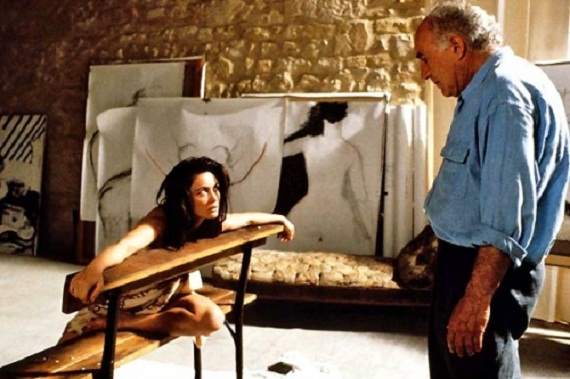 Grand Prix winner of the 1991 Cannes Film Festival, La Belle Noiseuse recounts the creative revival of a famous old painter who finds new interest in his art after encountering a young woman. Passionately portrayed by renowned French actor Michel Piccoli, Frenhofer takes Emmanuelle Béart’s Marianne to his atelier in order to transmute the sight of her naked body into high art.

La Belle Noiseuse’s four hours flow like a stream of spring water, thanks to Béart’s aery presence. Through lengthy, hypnotically paced shots that explore every inch of her luscious figure, the film perfectly depicts the undercurrent sexual tension that is always present between the painter and his model.

In one of the most erotically charged scenes, Marianne follows Frenhofer’s instructions and poses backwards. For the moment, the camera refuses to show her bottom, but instead focuses on its capturing on Frenhofer’s canvas, exquisitely converting the irresistible lust for flesh into the newfound lust for art. 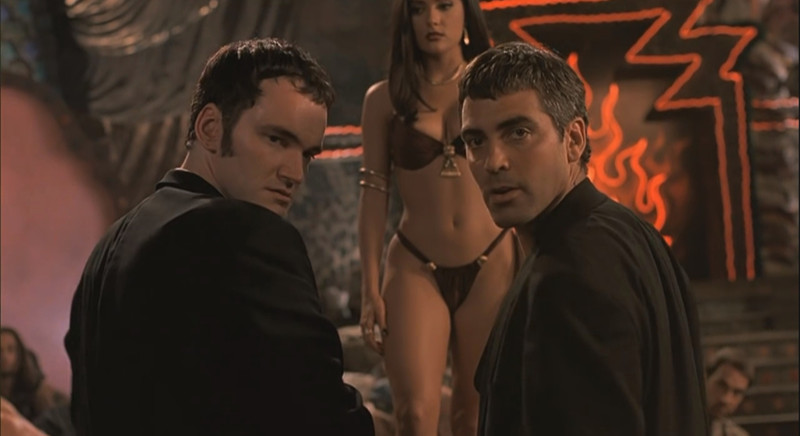 In the 1996 gorefest From Dusk Till Dawn, written by him and directed by Robert Rodriguez, he went one step further, footwise. Upon their arrival at the Titty Twister strip club, the two criminals and their hostages witness a one-of-a-kind show by the house’s leading mistress, Salma Hayek’s Santanico Pandemonium.

2. In The Mood For Love / Maggie Cheung and Tony Leung walk down the alley

The fact that a film so erotically electrifying does not contain a single sex scene is remarkable. Wong Kar-wai’s elegant masterpiece In The Mood For Love is bursting with intense sexual moments. Its heroes however, tragic figures wronged by their legitimate partners, yet committed to an extremely prudish milieu, never succumb to intimacy.

From the spellbinding camerawork and hypnotic inner rhythm, to the brilliant set design and warm cinematography, Wong Kar-wai is in absolute control of his expressive mediums and perfectly orchestrates a passionate and doomed romance.

You can feel the agony every time his wonderful, restrained protagonists walk down that narrow alley. In smooth slow-motion and with the magnificent soundtrack at full blast, Maggie Cheung and Tony Leung share desperate, fleeting glances and their burning desire is being transcended to pure visual poetry.

One of cinema’s most heartrending and honestly portrayed love stories, In The Mood For Love is an ode to the everlasting allure of the unfulfilled.

Bergman’s groundbreaking psychoanalytical work and his intensive look into the subconscious realm established him as one of the most influential filmmakers of all time. In 1966’s Persona, the film that is largely considered his magnum opus, he perfected his minimalist yet highly sophisticated directorial style, further developing his introspective concerns.

Persona is a profound exploration of an intense -almost vampiric- relationship between young nurse Alma and her patient Elisabet, a renowned actress who suddenly went mute. Exquisitely performed by Bibi Andersson and Liv Ullmann respectively, the films touches upon issues like mental illness, sexual identity and the duality of human nature.

There is a scene where Alma describes to Elisabet a sexual encounter she once had on a beach with another female and two random boys. Simply but effectively filmed through a series of generous closeups, we witness Bibi Andersson’s character get so absorbed in her narration, as if she’s reliving the whole experience.