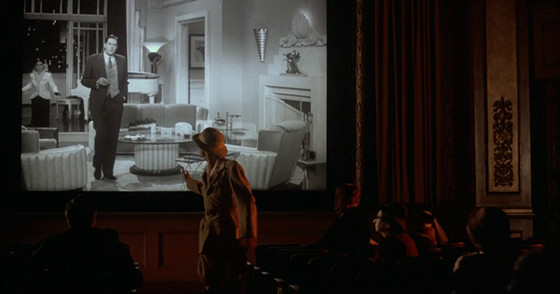 Woody Allen’s charming nostalgic comedy follows Cecilia (Mia Farrow), a poor waitress who avoids the troublesome Depression era and her abusive husband by escaping to the cinema in order to forget her sorrows. After she watches one of her new favourites, “The Purple Rose of Cairo” for the fifth time, the charming archaeologist and explorer Tom Baxter (Jeff Daniels) breaks the fourth wall and looks straight at Cecilia, telling her that she must really love this movie since he has seen her so many times.

He breaks all rules of fiction and reality and breaks free from the black-and-white cinema screen into the actual cinema, where the audience and his movie cast mates are shocked at his ability to move between worlds. He and Cecilia quickly take off and fall in love while everything else falls apart.

The characters on-screen are left clueless since the film cannot continue without Baxter, so they all sit around in the living room; smoking, arguing about whose the true hero of the story “The Purple Rose of Cairo”, and drinking champagne that is actually ginger ale.

The cinema loses all its ticket sales since no movie is actually happening, the Hollywood executives go crazy, and the actual actor who portrays Baxter, Gil Shepherd (also portrayed by Jeff Daniels), is sent to find his character before he destroys his reputation since they look the same, and ironically also falls for Cecilia due to her fondness for film.

Allen’s nostalgic comedy wittily avoids his usual modern day New York neuroticism and psychoanalysis in favour to a tribute not only to cinema, but the fine line between reality and fantasy. The film won the BAFTA Award for Best Film, while Allen received several screenwriting nominations, including an Academy Award, a BAFTA Award and a Writers Guild of America Award. 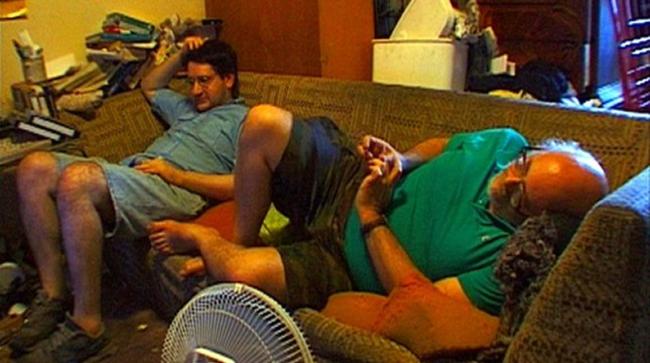 This documentary focuses on five obsessive cinephiles in New York who spend as much as their life as possible at the movies. It illustrates the lengths they go through to see around 700 to 1000 films in a year, specifically at the cinema.

All with their specific tastes, routines and specialties, their life revolves around screening times and subway schedules. Literally, all of them have complex spreadsheets and journals calculating which movies in which locations and which subways to take in order to limit the time wasted and maximize the amount of time in front of the screen. They live off disability benefits, unemployment benefits, inheritance, that is – none of them really work besides one who works part time and is especially agitated by the fact that he is missing movies.

They take note of every film they watch, keep the ticket stubs, the programs, the press kits and any promotional merchandise they can find. One of them, Jack Angsteich, deliberately eats a constipating diet with no fruits or vegetables to minimize trips to the restroom so the film won’t be interrupted. They all take their bags with blankets, food, and medicine and some even know the phone numbers of the projectionists just in case the color or composition is off.

All have their own interests though like Bill likes European movies while Harvey, who is thought to be suffering from Asperger Syndrome, will watch literally anything, can quote the exact running time of every film he has ever seen from memory and owns hundreds of soundtrack LP’s, but doesn’t even own a turntable. 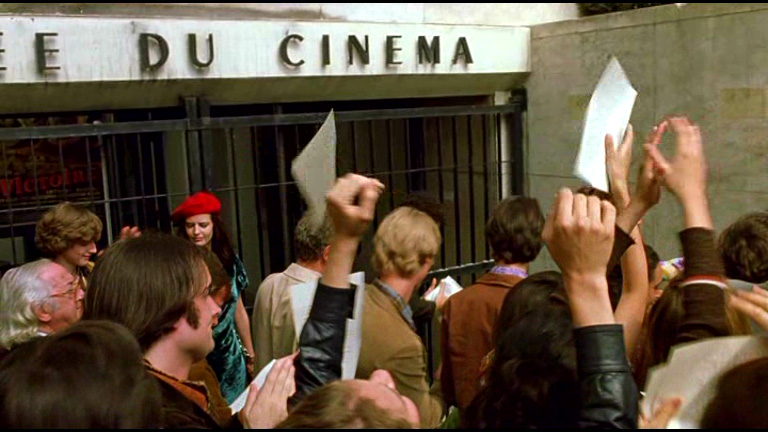 Bernardo Bertolucci’s romantic drama based on the novel “The Holy Innocents” by Gilbert Adair, who also wrote the screenplay. Set during the 1968 Paris student riots, Matthew (Michael Pitt), an American university student in Paris, meets a pair of eccentric twins, Théo (Louis Garrel) and Isabelle (Eva Green), at a protest at the Cinémathèque Française and immediately the three immediately bond over a shared love of film, especially since all of them are “insatiables” – those who sit closest to the screen.

Matthew temporarily moves in with them since their parents leave for a trip and he soon discovers that their free-spiritedness extends to their views on sexual liberality and experimentation.

Catalysed by their furious love of cinema, the film makes several references to classical and new wave films, most noticeably to Godard’s “Bande à Part”, since all three echo one of its scenes by trying to break the world record for running through the Louvre. Isabelle even says that her first words were lines out of Godard’s “À Bout de Soufflé”.

The characters constantly quiz each other about the movies, re-enact scenes like Isabelle imitating Garbo in “Queen Christina”, and get into futile, little arguments over topics like who is greater – Keaton or Chaplin? Like his “Last Tango in Paris,” transgressive sex in youth culture is at the heart of the film; with cinema, politics, riots and revolutions in the foreground. 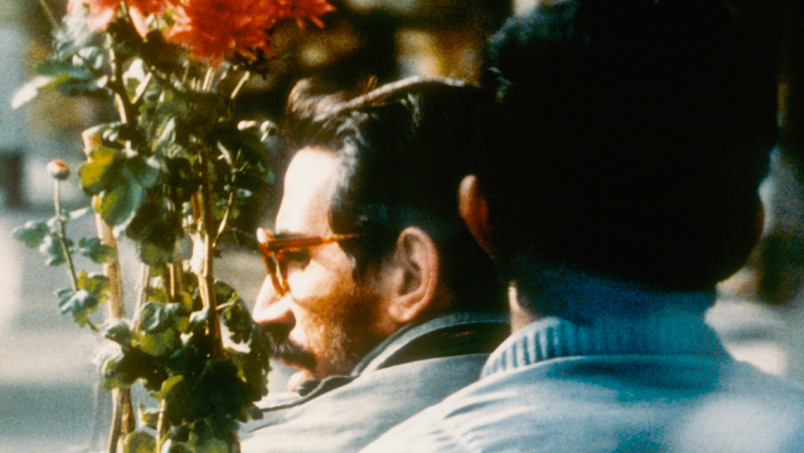 Based on real events that occurred in Northern Tehran in the late 1980s, the pseudo-documentary follows Hossain Sabzian who impersonates the popular Iranian director Mohsen Makhmalbaf to an unassuming family under the guise of using their house for his next filming location, as well as using their sons as actors.

Soon, the father, Mr. Ahankhah, develops suspicions over the legitimacy of the so-called Makhmalbaf, especially after seeing the real Makhmalbaf in a magazine, who seems much younger than Sabzian. He invites a journalist (Hossain Farazmand), who confirms that Sabzian is an imposter, and writes an article about him.

After reading this article, filmmaker Abbas Kiarostami immediately began making a documentary on Sabzian. He was allowed to film Sabzian’s trial and also convinced the affected family, the journalist and Sabzian himself to re-enact critical scenes that serve to create a blended version of reality.

One of the major points that Klarostami focused on in his own line of questioning during the trial was the reason he pretended to be Makhmalbaf in the first place. Sabzian, a cinephile who greatly admired Makhmalbaf and his films’ perspective on the everyday man, did it not only for the respect and the money, but also to become closer to Makhmalbaf, and to the art of cinema itself.

Kiarostami’s subtle approach to overlapping narrative merges truth and falsehood, appearance and reality and documentary and fiction as he uncovers this elusive multi-layered investigation that deconstructs documentary norms by making Kiarostami part of the film as well.

Set in the small village of Giancaldo, Sicily just a few years after World War II, the film follows the sweet, mischievous six-year-old Salvatore, nicknamed Toto (Salvatore Cascio). He spends all his time going to the movie house, Cinema Paradiso, despite his mother’s pleas to not waste her money on films.

He soon develops a friendship with the projectionist, Alfredo, (Philippe Noiret), who acts as a father substitute. He lets Toto watch movies from the projectionist booth, and teaches him how to operate the film projector.

The film follows Toto’s and Alfredo’s lives in the projectionist booth and the influence Cinema Paradiso has on all the locals who see it not only as a source of entertainment, but also as a place for meeting friends, chatter and smoking.

The film is largely told through flashbacks since it begins in Rome in the 1980s, where Toto has grown up to be a successful Italian film director and a bachelor (Jacques Perrin). It is immediately revealed that he has not seen his mother or returned to his home village in 30 years and that his old friend Alfredo, has died.

Giuseppe Tornatore’s Italian drama is a nostalgic evocation of his childhood days, with heart-warming, charming personalities who shout at the screen whenever the long-awaited kiss on screen is censored and cut out at the request of the local priest, and who all make Cinema Paradiso their second home. With a beautiful music score composed by the legendary Ennio Morricone along with his son, Andrea, the film won the Academy Award for Best Foreign Language Film.