Sion Sono’s Suicide Club is a disturbing film, due in no part to its gallows humor in relation to subject matter that’s anything but humorous. The story chronicles a detective’s investigation into a suicide epidemic among the nation’s youth, following a local mass suicide which triggers a wave across the country. A strange J-pop girl group and death statistic website seem closely linked to the incidents, but how?

Suicide Club makes a satiricial statement about a society where suicide is seemingly ingrained in its culture. It also poses some questions about the influence of celebrity role models, in correlation with the rise of the internet and the power it holds over us. Despite holding a microscope towards Japanese society at the time – during a period where suicides were making headlines – some of the other underlying themes contained within the film are universally significant.

Ben Wheatley has been trailblazing his way to the forefront of British genre cinema in recent years, through a host of films which blend social realism and surrealism to memorable effect. A Field In England is by far his most experimental feature; a historical drama infused with psychedelia and English folklore, which poses some interesting questions about the timeless conflict between science and religion.

Wheatley has stated on occasion that the films hallucinogenic qualities were inspired by his experiences taking magic mushrooms in the past. And while drug trips do occur in the movie, it also harkens back to the folk legend of mushroom fields being gateways to other realms, with the repercussions of entering one like being stuck in limbo.

A Field In England doesn’t give us any definitive answers, and leaves the audience to decide whether its band of rugged scoundrels are trapped in purgatory, or whether they’re experiencing a drug-induced fever dream.

Lucifer Rising is a short film by occultist filmmaker Kenneth Anger, associate of Aleister Crowley and follower of Crowley’s religion, Thelema. Anger has been credited as one of the first filmmakers to address his own homosexuality in his films, itself a revolutionary feat considering some of them were released prior to the legalisation of homosexuality in many American states.

Lucifer Rising, like his other films, is emblazoned with occult imagery accompanied only by a woozy score courtesy of Bobby Beausoleil of Manson Family fame, currently serving a life sentence for heinous atrocities. Knowing this information – in addition to the imagery symbolizing a practice deemed “wicked’’ – makes the film feel like something you shouldn’t be watching – and that’s what makes it so fascinating.

Unless you’ve studied Thelema, the symbolism might go over your head. However, as a purely visceral experience, Lucifer Rising is as seductive, otherworldly, and forbidden as the devil himself. 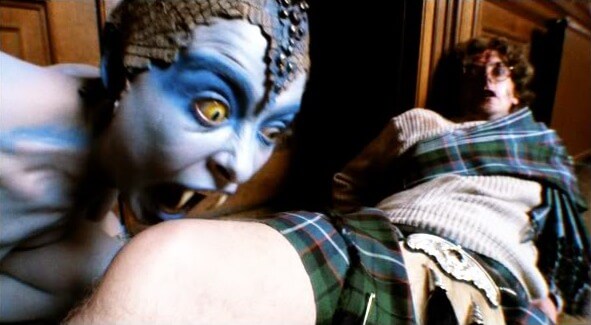 Ken Russell’s The Lair of the White Worm is loosely based on the Bram Stoker novel of the same name, which also draws influence from an English folk tale about the Lambton Worm – a dragon which terrorized local villages in County Durham centuries ago.

Set on an estate owned by Eve Trent (Catherine Oxenberg) and her sister Mary (Sammi Davis), archaeologist Angus Flint (Peter Capaldi) discovers a large serpent skull, which he soon deduces belonged to the D’Ampton Worm, an ancient mythical creature supposedly slain generations ago by the ancestor of the current Lord D’Ampton (Hugh Grant). However, it might not be so dead after all.

This is one of Russell’s most “fun’’ films, reminiscent of Hammer horror infused with Russell’s trademark psychedelia, with some mindless B-grade monster movie campiness for good measure. It’s a bizarre film that holds up as one of the best of a unique director.

El Topo is an acid western that catapulted Jodorowsky’s career to venerated heights, gaining the attention of midnight film audiences, artists, filmmakers, and musicians at the time. Cited as the first ever midnight movie, it was a hit among cult audiences, and its influence seeped into the music of artists such as John Lennon, Peter Gabriel and Bob Dylan.

It tells the story of a gunfighter’s quest for redemption, after he hunts down and kills the gang of outlaws responsible for slaughtering the inhabitants of a town in the desert. On his journey he meets a woman who convinces him to defeat the four greatest gunslingers in the land, so he can become the greatest gunman in the land.

Again, like all of Jodorowsky’s work, El Topo is open to interpretation. Given that each of the gun masters symbolize different religions, it can be viewed as the eradication of different belief systems to establish one. But that’s merely one viewpoint that doesn’t even scratch the surface of this masterpiece. 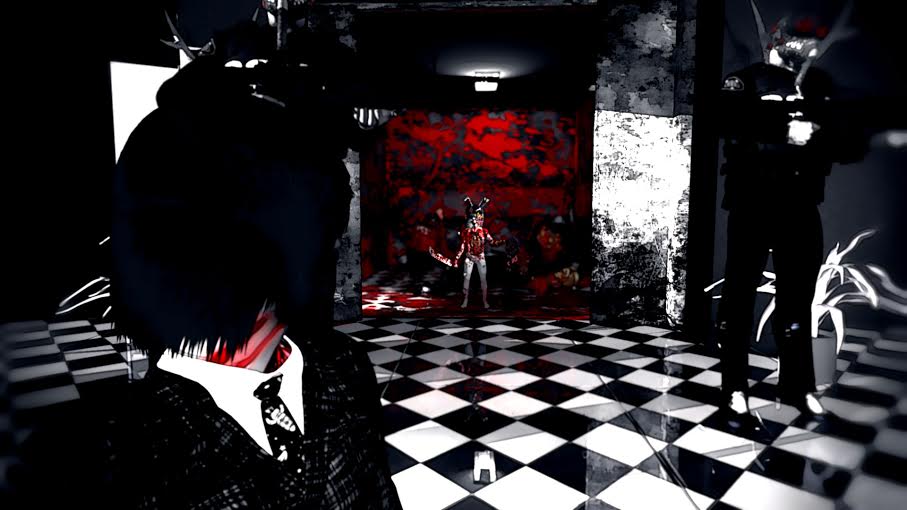 Jimmy Screamerclauz has carved his own niche in underground horror as one of its most original directors. Whether you love or hate his films – and there is a rarely an in-between – there is no denying that he has a style of animation that’s unique and instantly identifiable. The content within his films is taboo shattering, disturbing, and truly bizarre – while boasting a hallucinogenic quality that’s truly unsettling.

When Black Birds Fly is Screamerclauz’s follow-up to Where The Dead Go To Die – a film that disturbed, appalled and puzzled even the most diehard fans of esoteric cinema. However, that film – for all its otherworldly brilliance and demented imagination – was the work of a filmmaker still refining his craft; it had plenty of style and shock value, but the narrative wasn’t as fleshed out as it could have been. When Black Birds Fly is a vast improvement, retaining the director’s stylistic traits, while applying them to an engaging, thought provoking story.

Set in the authoritarian dystopian state of Heaven, ruled by the dictator Caine, citizens live in a seemingly perfect society surrounded by a great wall to guard them from the realm of The Evil One. One day, when a gap appears in the wall, an injured cat lures two children into the forbidden area, where they are tempted by a brightly colored exotic fruit. Sound familiar? They subsequently meet The Evil One, and truths are unveiled.

When Black Birds Fly is a religious parable which poses some interesting questions about the power of religion and state. By no means is it an easy film to digest, nor is it a comfortable experience. But it is a film that audiences won’t soon forget after watching, and a landmark achievement for one of independent cinema’s most devilishly original filmmakers.

With his contributions to horror, David Cronenberg earned himself a reputation as the unprecedented king of body horror, and it’s a moniker that still follows him around to this day, despite the director leaving the genre behind a long time ago. That being said, there haven’t been many horror filmmakers with a knack for creating stomach-churning movies that are also intellectually provocative as Cronenberg’s, and Videodrome is arguably his finest horror outing in both aspects.

The imagery depicted in Videodrome is disturbing, grotesque, and unforgettably strange. Like the power of the violent pornographic content which affects lead character Max Renn, it seeps into your subconscious to nauseating effect.

Yet, at its core, it questions the rise of technology and whether or not an oversaturation of media can corrupt the psyche – and in typical Cronenberg fashion, these inner anxieties are manifested physically in the form of a pummelling, nightmarish tour de force of disgusting visuals and outstanding F/X work.

Tokyo Gore Police is the poster child for the modern Japanese gore film, in which excessive violence, absurd comedy and downright oddness are commonplace. It’s also one of the better ones of its kind, having garnered critical acclaim for successfully achieving its perverse, silly and deranged intentions with skill, craftsmanship and a lot of imagination.

The story follows a vengeful police woman in a futuristic Tokyo who must battle an army of mutated creatures known as ‘Engineers,’ whose ability to spout weaponry from their bodies pose threats for society. Aiding the officer is a sadistic task force that specialize in hunting down and killing the deformed beings.

By no means is it a film for those with weak stomachs or highbrow demands, but it’s a perfect slice of demented fun for midnight movie aficionados thirsty for blood and hungry for carnage. 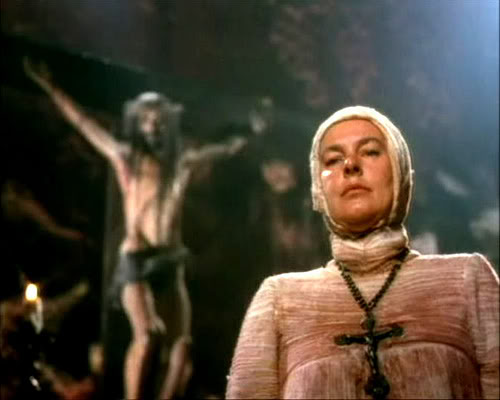 Alucarda is a Mexican nunsploitation film which garnered notoriety at its time of release due to its anti-religious sentiments, Satanism, and lesbian erotica. Much like Ken Russell’s The Devils – a film it is often compared to – it’s a scathing attack on the political and religious establishment of its time period, chock full of sacrilegious imagery.

The film is about two girls living in a convent who become possessed by a Satanic force unleashed at a nearby burial site. What ensues afterwards is a turbulent series of events including torture, murder, sex and witchcraft.

Alucarda is a masterpiece of exploitation cinema; a film that gleefully – and therapeutically – acted out against religious and political persecution, and deserves to be acknowledged alongside The Devils.

The haunted house has been a component in scary storytelling since the very beginning of scary storytelling. It’s a traditional setting we’ve seen and read about countless times, and more often than not, the results are the same: formulaic. But then there’s Hausu – a movie that not only stands out from other haunted house films, but it’s unlike anything else in the history of cinema as a whole.

The film follows a group of schoolgirls that go to a mansion occupied by one of their aunts to enjoy a summer break in the country. However, the aunt is a witch waiting for her dead soldier husband to return from war, and the house is hungry – and virgin schoolgirls on the menu. What ensues is the looniest series of events ever depicted on film – including a girl-eating piano, aggressive watermelons, and a floating head that lives in a well – and that’s only scratching the surface.

Hausu is a celebrated cult classic that never ceases to amaze. Its influence can be felt in Sami Raimi’s Evil Dead II, and the 1986 comedy horror House directed by Steve Miner – but they don’t come close to matching Hausu for sheer madcap lunacy. This is a classic piece of surrealist cinema, with its tongue placed firmly in its cheek.