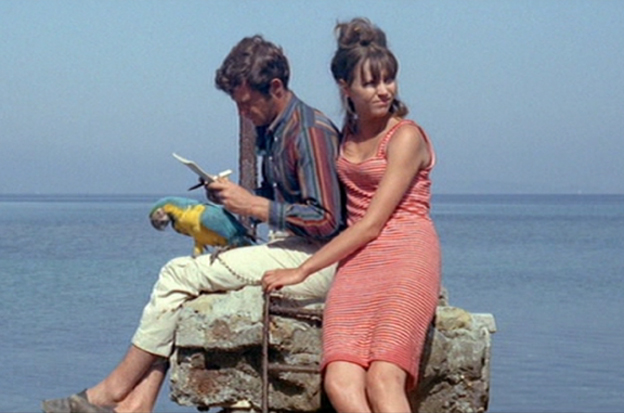 Pierrot (Jean-Paul Belmondo) is married, but meets the charming babysitter Marianne (Anna Karina) at a social gathering, and he decides to run away with her and leave behind his trivial bourgeois life. Soon it is revealed that Marianne is being chased by hit men from Algeria, and as they both have reason to flee, they set out on a long and unconventional trip from Paris to the Mediterranean Sea.

In this film, Jean-Luc Godard makes use of bright primary colors (notably blue, red and white), which definitely also affects and strengthens the way fashion is displayed. It not only ties together the aesthetics of the film, making the characters always seem to blend in with their environment, it also makes Marianne and Pierrot look cool and trendy together. It’s simple, fresh, and timelessly stylish.

Other than the quirky relationship the two share with their bright outfits, what is especially cool about the fashion of “Pierrot Le Fou” is the fact that for much of the film, the two characters are stranded on a beach or running away from their past, but always somehow look as though they were taken out of a fashion magazine, and the simplicity and unrealistic feel of it once again ties together with the style of the film itself: peculiar and amusing.

Remarkable outfit: Her red-and-white striped summer dress with his red-and-blue striped shirt as they sit by the water petting a blue parrot. 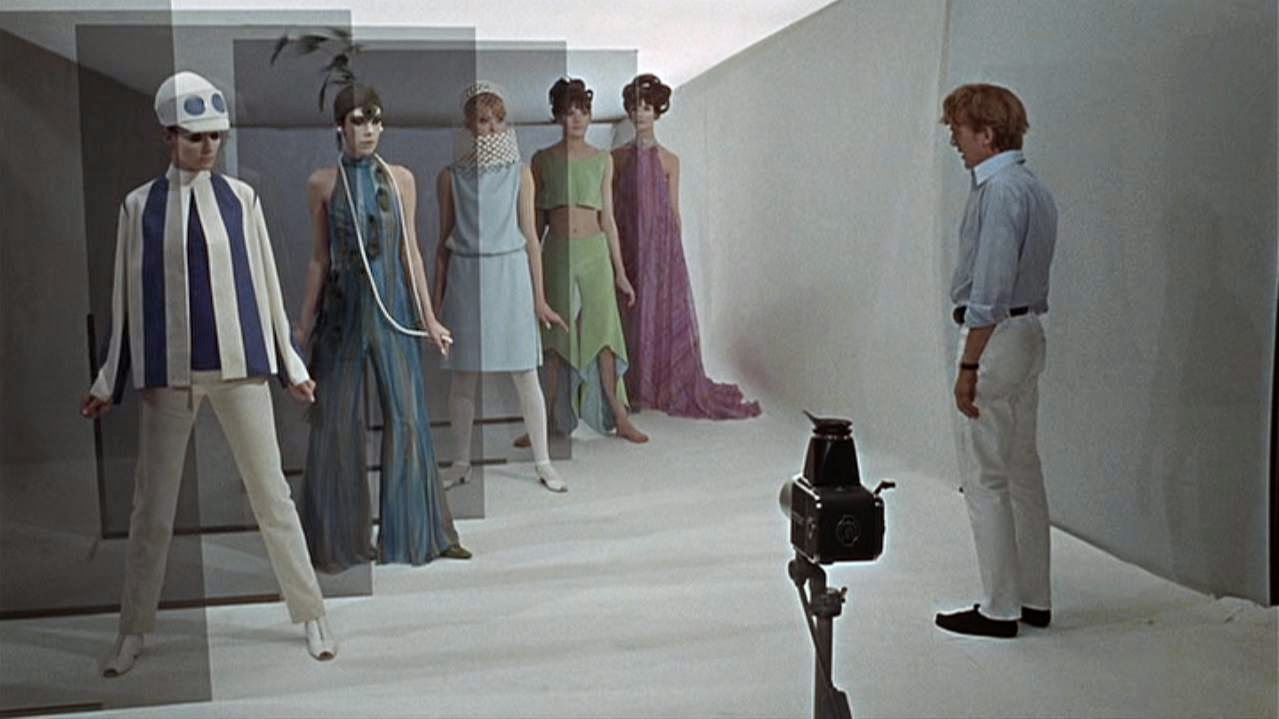 This is a real 60’s film about sex, drugs and rock ’n’ roll by Michelangelo Antonioni. It’s the 1960’s in London, and as a fashion photographer, Thomas slowly becomes bored by his own lifestyle so full of easy sex and pop music, and instead gets infatuated with a mysterious woman. Trying to get closer to this enigmatic beauty, he blows up a photo he took of her in the park, and slowly discovers that he might have been a witness to a murder at the exact moment the picture was taken.

This film’s plot actually revolves around more negative parts of the fashion industry with groupies, long hours, and a certain lack of purpose and personality. And although the film does comment on the industry by way of Thomas’ boredom and meaningless life, it still doesn’t shy away from looking extraordinarily fashionable – even when he’s not located in the studio surrounded by models. The Brit-hip style is also very visible when Thomas just walks around the park in white jeans, a fitted blazer and Chelsea boots.

Even though it’s played out in only one day, and just a few clothing changes are made (aside from the models), it’s still very fresh all the way through. For example, take the infamous sex scene with Thomas and two obsessed girls who have been following him around all day, when they get completely naked and the clothes are out of focus; even then it’s beautiful with a large lilac backdrop giving a clear sense of the mood in every scene.

Remarkable outfit: Thomas in his blue shirt and ripped khakis, shooting the model Veruschka in a shimmering black cocktail dress.

Clyde Barrow, who just recently got out of prison and has now turned toward bank robbery, meets Bonnie Parker, who’s bored by her own life, and together they embark on a life of crime, lust and adventure in the southwest United States. It’s based on the true story of Bonnie and Clyde in the 1920’s.

In this film, audiences were brought back to the fashion of 1920’s and 1930’s with pencil skirts, knit sweaters, silk scarves wrapped around the neck, and vests for men. It’s like Bonnie and Clyde (Faye Dunaway and Warren Beatty) are perfectly stylish as a couple in every scene, but it’s especially the use of their hats that makes an impression; they’re not just for practical use, but also fashion statements. The hats give the characters of Bonnie and Clyde something very mysterious and sexy, which fits their personalities perfectly.

There is something elementarily relatable about the two characters; they are bored with life, and while they’re obviously doing something wrong, they do it with charm and wit. In the same way, the clothes seem relatable for the audiences. Sure, the clothes are chic and stylish, but at the same time it’s also clothes that you could wear to work. Bonnie is without a doubt very sexy, but she is so in a rebellious and kind of boyish fashion.

Remarkable outfit: The cover of the film with Bonnie and Clyde and their hats, revolvers, and matching colors. 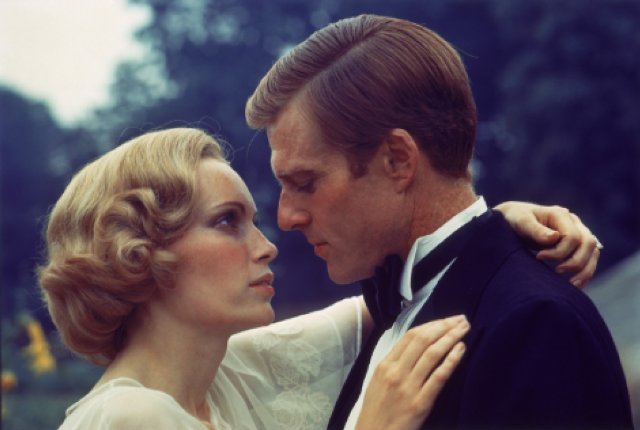 It’s the classic F. Scott Fitzgerald story of the young and inexperienced midwestern Nick Carraway, who moves to Long Island in the roaring 1920’s. Nick quickly becomes fascinated with his mysterious and rich neighbor, who goes under the name of Jay Gatsby, and who seems to lead the most profligate though amazing life. As Nick is brought into Gatsby’s world, he becomes aware of all the tragedy, obsession and lost love that is Gatsby’s life.

It is, of course, worth mentioning the 2013 remake that also displayed some truly lavishing clothes, but for the time being, we’ll stick to Jack Clayton’s tribute to the decadence and glamour of the 1920’s.

The costumes displayed in the 1974 version of the film remain impressive to this day, perfectly capturing the elegance and refinement Gatsby surrounded himself with in the jazz age. Furthermore, the film also helped Ralph Lauren truly establish himself as a brand, as he was the designer behind the beautiful clothes.

Not only are the stunning dresses worn by Mia Farrow (as Daisy) daring and fun with feathers, hats, and shimmer, the men’s fashion is just as great. Worth noticing, of course, is Gatsby, played by Robert Redford and his always-immaculate suiting. But it isn’t just the fit, it’s also the daring use of pastel and light colors, which is far ahead of its time, that make this film worth going back to when in need for some inspiration for the wardrobe, male or female. 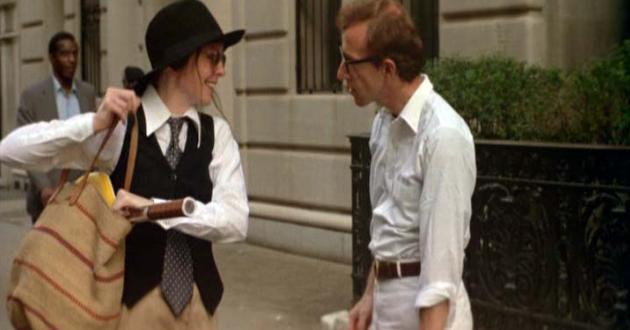 Woody Allen introduces us to the relationship between Alvy Singer (Woody Allen), a neurotic comedian, and his on-and-off girlfriend Annie Hall (Diane Keaton), who seems to be just as neurotic. The film follows Alvy’s stream of consciousness as he revisits memories of their relationship and tries to understand what might have caused their final breakup.

Diane Keaton’s role as Annie Hall can be very inspiring for every woman who wants to experiment and doesn’t want women’s fashion to just be beautiful and feminine dresses. In many ways, the character of Annie became a predecessor for mixing and matching feminine with masculine. She looks relatable, which is probably partly because much of the clothes she wears are actually Keaton’s own clothes, which means it really is everyday clothes and not costumes.

The role of Annie Hall started an androgynous trend for many women all over the United States after the film’s release. Women began mixing men’s clothes with their otherwise feminine items, and it was known as the “Annie Hall look”, making Diane Keaton a style icon.

Remarkable outfit: Annie Hall’s men’s tie underneath a black vest, a bowler hat, and a pair of loose khaki pants.

It’s Los Angeles circa 2019, and Rick Deckard (Harrison Ford) is a part of the Blade Runner unit, a special police force trying to hunt down and terminate replicants, illegal mutants that strongly resemble human beings. He’s forced out of retirement, as he has to terminate four newly escaped replicants who are looking for their creator on Earth.

This sci-fi film is a bit different from the previous films on the list, as it looks out into a bleak cyberpunk version of the future, and not something we necessarily know from earlier eras. Thus, the fashion is rather different, as it consciously tries to be futuristic, but it’s nonetheless very inspiring. It’s a combination of 1980’s style with shoulder pads and women’s suits on the character of Rachael (Sean Young), combined with futuristic sexy punk, torn pantyhose and raccoon-like eye makeup on replicant Pris (Daryl Hannah).

It all plays into the feel of the dark city with its industrial architecture and robot-like people, and audiences who normally had never taken any particular interest in fashion suddenly gained some respect for its visual importance in a gritty sci-fi film. Each character’s clothes carry importance, not just those of the women, and even when looking at small details such as Deckard’s shirts, there are geometrical patterns and cubes everywhere – it’s not just the conspicuous long coat.

Albert Sica (Michael Gambon), a barbaric and egotistical crime boss, eats dinner with his wife and friends each night at his own restaurant. What he doesn’t notice is that his wife Georgina (Helen Mirren) is extremely tired of him, and has therefore engaged in a secret relationship with the kind bookseller Michael in between meals at the restaurant, seeing as he’s also a regular customer. The cook makes sure to cover for them, as he has also had enough of the abusive Sica. It all escalates brutally as Sica finally discovers what is going on around him.

Jean Paul Gaultier is the costume designer behind this visual masterpiece. When watching the film, it’s quite clear what an aesthetic assurance Peter Greenaway has had when planning the interior design, cinematography and costumes. The clothes are in style with everything else, in dim tones of black, red, green and white, and important or not, each character at the restaurant wears clothes that are impeccable and the result of masterful creativity.

It must have been a dream come true for Gaultier to be given such an inventive space as a fashion designer, not only because there really has been a focus on the importance of the clothes from Mirren’s lingerie to the waitresses’ red corset dresses, but also because of small amusing elements such as the way clothes switch color according to which room they’re in.

Remarkable outfit: Georgina’s first outfit – a dress that changes color from red to white, one long glove with fringes, a feather hat and a sheer couture bralette.