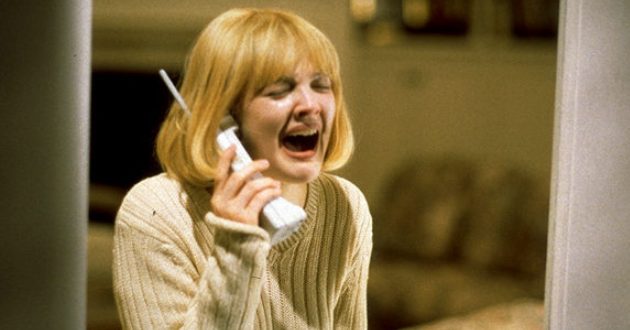 Rolling off the success of his ‘New Nightmare’, Wes Craven trumped himself with ‘Scream’, one of the finest horror films ever made. The movie revolutionised a genre and realised the full potential of self-reference in horror cinema; it’s not only a good slasher movie in its own right but a good slasher movie about slasher movies.

A group of teenagers, including Sidney Prescott (Neve Campbell), are hunted down by a masked serial killer going by the name of Ghostface.

The distinguishing factor of the film is that it doesn’t occupy a space ignorant of horror films; the characters are aware of the genre’s inherent conventions. There’s film trivia on ‘The Howling’ and ‘Friday the 13th’ in the dialogue and situational irony as a fan complains about Laurie not looking behind her in ‘Halloween’.

‘Scream’ establishes the archetypal characters and circumstances of the slasher genre: the virginal “final girl”, the single masked killer, the busty blonde, the anniversary murder, the useless police, the falsely arrested boyfriend, the small town setting, the slaughtered father, the “punishing” of sex and drug use, co-ordinated jump scares, ultra-bloody deaths, lengthy chase scenes, the “terrible place” and strange phone calls; and then subverts them in its own unique way.

‘Scream’ is about a perfect as modern horror comes: smart, funny, nostalgic and scary. Its self-conscious approach proved two things: that horror is not merely a filmic genre but a culture, and that the thing that frightens scary movies most is pushing the envelope.

While writer-director Michael Haneke never intended his home invasion thriller ‘Funny Games’ to be a horror film, the end result can sit nowhere else but meta-horror. Remorselessly nihilistic, the film brutally violently the typical relationship between character and audience; fiction and reality.

Two psychopaths (Arno Frisch and Frank Giering) pose as polite neighbours to a vacationing family, before taking them hostage and forcing them to participate into a series of sadistic games.

One of the villains consistently breaks the fourth wall, sometimes looking at us and smirking or remarking that the movie hasn’t yet fulfilled its feature length runtime. At other times he asks us questions like whether we think the family will survive or whether they’ve suffered “enough”.

As Lacan noted, the presence of someone else’s gaze leads to anxiety; we as a viewer lose our autonomy over the subject, and it’s terrifying.

At one point the villain even rewinds the tape when a favourable outcome occurs. The heroine’s success is erased and then she is killed. A lingering shot of a knife in a boat becomes a red herring. There’s no hope. We as an audience are powerless.

‘Funny Games’ is one of the cruellest movies ever made. Haneke originally wanted the film to be set in America so that he might indict the US’s obsession with violence in the media and in popular culture. 10 years later he completed his vision with a shot-for-shot remake featuring Naomi Watts and Tim Roth.

There’s been growing controversy over the last few years as David Lynch’s ‘Mulholland Drive’ has appeared on – and even topped – lists of the best horror films of the new millennia. It hardly adheres to horror film conventions; with that saying however, metacinema, or more particularly meta-horror, is probably the closest thing the film comes to in terms of “genre”.

The plot becomes less and less relevant as the movie progresses; the lives of a budding actress and a woman left amnesiac by a car-crash intertwine as they enter the dark and freakish world of Hollywood in an effort to discover their true identities.

If there’s any one precondition that a horror film must adhere to, it’s that it must evoke horror in the audience.

Strip a genre of its conventions and, generally speaking, it’s defined by the emotional response it elicits in the viewer: drama, comedy, mystery, suspense, romance and, of course, horror. ‘Mulholland Drive’, in its non-liner stance, which only makes sense upon an emotive and metaphoric level, satirises the notion that genre – horror most of all – can be reduced to a list of clichés.

The “first part” of ‘Mulholland Drive’ is a mixtape of conventions from noir, romance, comedy, thriller, mystery, western, musical, fantasy and horror. It’s a metaphor for film itself: an idealised version of reality, which like in Ingmar Bergman’s ‘Persona’, fissures and tears apart when one realises “there is no band… it is all a recording”. Like Bergmann’s film, the movie repeats in the “second part”, and reveals the nightmare behind the wistful dream.

Frightening and ground-breaking, ‘Mulholland Drive’ is a meta-horror film at the very least, and arguably the best movie of any kind to emerge since the year 2000. It’s a film which looks upon itself and finds a nightmare.

Edgar Wright’s zombie-comedy is a brilliant exercise in the self-reference. Like the latter two films in the so-called “Three Flavours Cornetto” trilogy, ‘Shaun of the Dead’ abounds with commentary on a genre, in this case horror, and offers a delightful mix of comedy and terror.

While trying to survive a zombie apocalypse, a man (Simon Pegg) abandons his mundane life, and with the help of his mate (Nick Frost) attempts to win back his neighbours, family, friends and ex-girlfriend (Kate Ashfield).

The film pays delightful homage to zombie films and the horror genre more broadly. There are explicit references, such as in the titular pun on Romero’s ‘Dawn of the Dead’, and more subtle ones such as a hidden reference to Lucio Fulci in a newspaper and a 360ᴼ pan of the Winchester recalling ‘Alien’.

‘Shaun of the Dead’ is aware that it’s a piece of popular culture, acknowledging the sources which inspired it while simultaneously celebrating the filmic culture surrounding them. It poses the question of why a film – especially a horror film about undead monsters – should attempt to mirror reality.

‘Shaun of the Dead’ is a masterful retrospect on the modern zombie, and won the praise of such greats as George Romero, Stephen King and Quentin Tarantino. It’s a funny, scary and moving tale which self-consciously realises the intertextual web in which all films co-exist, and the power of each to touch us; to make us scream, laugh and – yes – even cry.

Rob Zombie’s follow-up to ‘House of 1000 Corpses’ brings together the best parts of his first feature and combines them into a suitable homage to C-grade horror. Mastering the sharp, coherent metalanguage and the balance of camp and shock lost in the original, ‘The Devil’s Rejects’ is as close to a masterpiece as exploitation cinema comes.

Set 1978, it follows the psychopathic Firefly family who hit the road in an attempt to escape a ruthless cop (William Forsythe).

‘House of 1000 Corpses’ is an oddity worth watching. It’s somehow highly original yet highly derivative; sitting somewhere between the horror, political commentary and self-irony of ‘The Texas Chain Saw Massacre’ and ‘Natural Born Killers’. It makes specific references in the dialogue, cinematography and characters, while the film itself randomly skips between colour, monochrome, negative and stroboscopic splicing.

It’s interesting but the more the film digresses, and the more it forgets its satirical humour, the more it seem overshadowed by the movies it pays homage to.

‘The Devil’s Rejects’ on the other hand remains more restrained and ultimately succeeds where ‘House of 1000 Corpses’ failed. Its references to Craven and Hooper are coordinated, sincere and witty, and bring a strange kind of charm to the film which lifts it from simple C-grade shlock and into satire.

The film is fascinated with the hypocrisy of violence; the death and torture scenes are hyperbolic, the final sequence subverts the typical happy ending, and the usual relationship between the murderer as the villain and the law as the hero is reversed.

‘The Devil’s Rejects’ knows what it is and knows it’s not for everyone. Its pitch black humour forces us to consider that all-too-often those who irrationally criticise the violence in horror films – take the “video nasties” culture as an example – are often those who, quite ironically, condone war, aggression, misogyny, violence against animals and hate crime