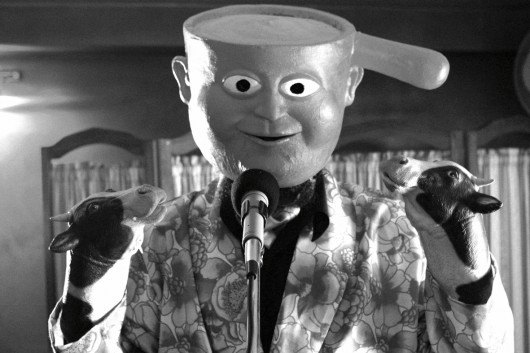 In Benoît Delépine and Gustave de Kervern’s sophomore feature, cinematic madness escalates into an exuberant ode to surrealism. The film opens with an old suicidal picador who ends his career exclaiming the title of his “incarnate” Fernando Arrabal’s debut: Viva la muerte! Subsequently, a wealthy collector (writer and Buñuel’s frequent collaborator Jean-Claude Carrière) comes home to enjoy his latest “catch”, while his deaf-mute lackey (de Kervern) “plays” with a couple of Rottweilers. By the irony of fate, the master meets his doom, whereas a slave gains his freedom.

The former servant’s celebration starts with an attack on a golfers couple and ends in a private Zoo whose visitors have the opportunity of tasting the exhibited specimens. After the involvement in a failed “dognapping”, he and the two of his ketamine addicted accomplices (Delépine and Eric Martin) are forced to help the dog’s owner – corpulent Avida (XL model Velvet D’Amour) – and honor her last wish to die on the top of the mountain…

One might already assume that the author duo is strongly influenced by Buñuel and Dalí whose anagram pseudonym (Avida Dollars) is borrowed for the titular heroine’s name. And the lengthy synopsis suggests that Avida is in no way conventional, so what Delépine and de Kervern create here could be labeled as authentic and/or progressive.

Via the irrational, occasionally grotesque vignettes – the projections of a collective dream – they deal with the life’s contradictions, laugh in the face of inevitable death and comment on the modern society between the lines. The backbone of their weird juxtapositions is a great mixture of absurd, dark and deadpan humor. The sophisticated B&W imagery and the motley soundtrack are also praiseworthy. 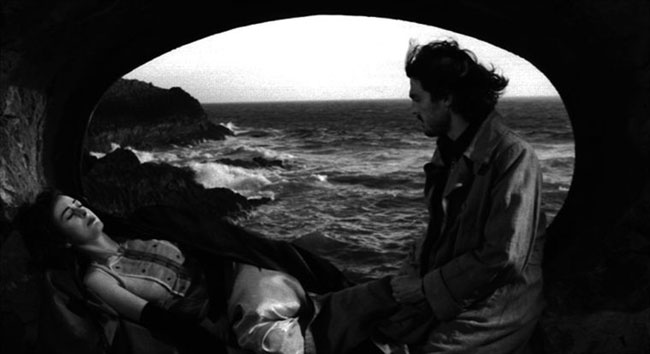 “Man is a God when he dreams, a beggar when he thinks.” (Johann Christian Friedrich Hölderlin)

Cryptic and non-conformist, Dharma Guns (La succession Starkov) is the fourth feature for F.J. Ossang, the French poet, cineaste and the singer of a punk-industrial band M.K.B. Fraction Provisoire.

Most probably inspired by La Nouvelle Vague, Expressionism and the writings of William Burrhoughs, as well as Maddin’s, Lynch’s and even Cronenberg’s films, it could be described as a metaphysical psycho-drama or a solipsistic anti-thriller which takes the audience to the obscure world of eccentric folks, lucid hallucinations and dizzying nightmares.

Guy McKnight, the frontman of The Eighties Matchbox B-Line Disaster, plays a disoriented hero Stanislaw (Stan) van der Daeken – a modern Orpheus who tries to save his fiancé Délie (Ossang’s muse Elvire) from the hell of “genetic doubles” and secret organizations. The shadow of an enigmatic professor Starkov who might be Délie’s father is cast over him…

A challenging, fragmented story seems like a vague reflection in the broken mirror – it is a complex (for the impatient, frustrating) puzzle whose parts are locked in the labyrinth of subconsciousness. Built upon the twisted logic and Stan’s faltering memories, it depicts a meditative odyssey through the realm of ghosts.

Ossang reconstructs (or is it better to say deconstructs) his protagonist’s broken mind and blurs the line between reality and illusion, while spinning an intriguing (pseudo) mystery with absurd dialogues and perplexing soliloquies. And given that the concept of “dharma” has multiple meanings, finding the answers to the author’s many questions is not simple at all. But the deciphering process is mitigated by the powerful score and the beautiful B&W visuals.

Les rencontres d’après minuit (You and the Night) begins with an homage to La belle captive (1983), it borrows its narrative structure from the The Breakfast Club (1985) and to some extent from Il Decameron (1971), whereby it features references to Les lèvres rouges (1971) and sexploitation tetralogy Ilsa, amongst other films. But it is much more than a mere test of the cinephile’s knowledge.

Gonzalez explores the possibilities of an utopian community formed through the emotional bonding of seven different people, while his characters shed their stereotype-skin and expose all of their vulnerabilities. Everyone has a story to tell – whether it is dark, funny, romantic, melancholic, phantasmagorical or even a despicable one, it is always a meditation on love, dreams and/or death.

These lost souls are actually lonely, looking for something akin to a family or rather a very open-minded family which approves of incest. The most intriguing of their meticulously portrayed “confessions” is probably the hosts’ faux-gothique fairy tale of beautiful, intentionally artificial sets a la Kwaidan, Silvestre or Querelle.

How would have David Lynch’s college days looked like, if he had been born a few decades later? While dreaming of a possible answer to this question, Paul Le and Julien Pichard create a mildly twisted fake biopic which sheds some light on the prominent director’s beginnings as a painter. As expected, they inject many references to Lynch’s films (and a TV show) from Eraserhead through Twin Peaks and all the way to Inland Empire.

The authors favor artistic freedom over the facts, so at the very beginning (the second minute, to be precise), they decide to strip young David (excellent Sylvain Urban) for the sake of education. The thing is, he’s late for the class and for that reason he must comply to the unwritten rule – a professor says it’s a tradition – and pose nude for his colleagues. Soon afterwards, he realizes that nothing is what it seems and not to mention that his apathetic saxophonist Fred (Nicolas Ramade) might be imaginary.

On the other hand, he’s courted by three girls. Cheerful Audrey (Laure Maloisel) likes to dance with her eyes closed in the half-dark. Promiscuous Laura (Amandine Klep) hides a complicated relationship with her dean father behind a wide smile. And meek, wheelchair-bound Claire (Marguerite Dabrin) is Laura’s antithesis.

Beside the character allusions, the connoisseurs of Lynch’s oeuvre will notice the details such as the blue key, hazy shots, gloomy lighting and fading to black. Unfortunately, during the non-homaging sequences Le and Pichard’s bold surrealistic “hypothesis” shows its weaknesses.

The majority of flaws could be caused by the budgetary restrictions and the lack of the whole team’s experience, so the viewer’s reaction depends on his/her attitude towards a fan-fiction. Nevertheless, one can not deny the great ambition behind La vie rêvée de David L (The Dreamlife of David L).

Inspired by Ovid’s magnum opus, Métamorphoses is an eroticized postmodern fantasy that transposes the setting of the original work to contemporary France. A few out of 250 ancient myths are intertwined into a provocative mélange of ascetic beauty and somewhat titillating atmosphere.

According to Honoré, Europe is a teenage girl who runs away from the school and becomes intimate with a young truck driver Jupiter, unaware of the arduous journey ahead. She encounters Gods, demigods and mortals of Ovid’s narrative poem, but they’re all, in a way, “vulgarized”. Bacchus is a petty criminal, Narcissus is an egocentric skater, Tiresias is a local transgender doctor and Orpheus is a religious zealot (and his story which comes the last is the most tiresome).

Through an episodic narrative, the adventures and “mischiefs” of those characters are depicted naturalistically, with minimal makeup and almost no special effects (with the exception of Argus) which practically means that only simple cuts are utilized to show the titular metamorphoses.

The involvement of non-professionals who don’t shy away from showing everything that Mother Nature endowed them with brings to mind Pasolini’s (vastly superior) The Decameron and Arabian Nights. Honoré’s fascination with unclothed human body is self-ironically addressed in Juno’s question to Jupiter: “Why are you naked again?”