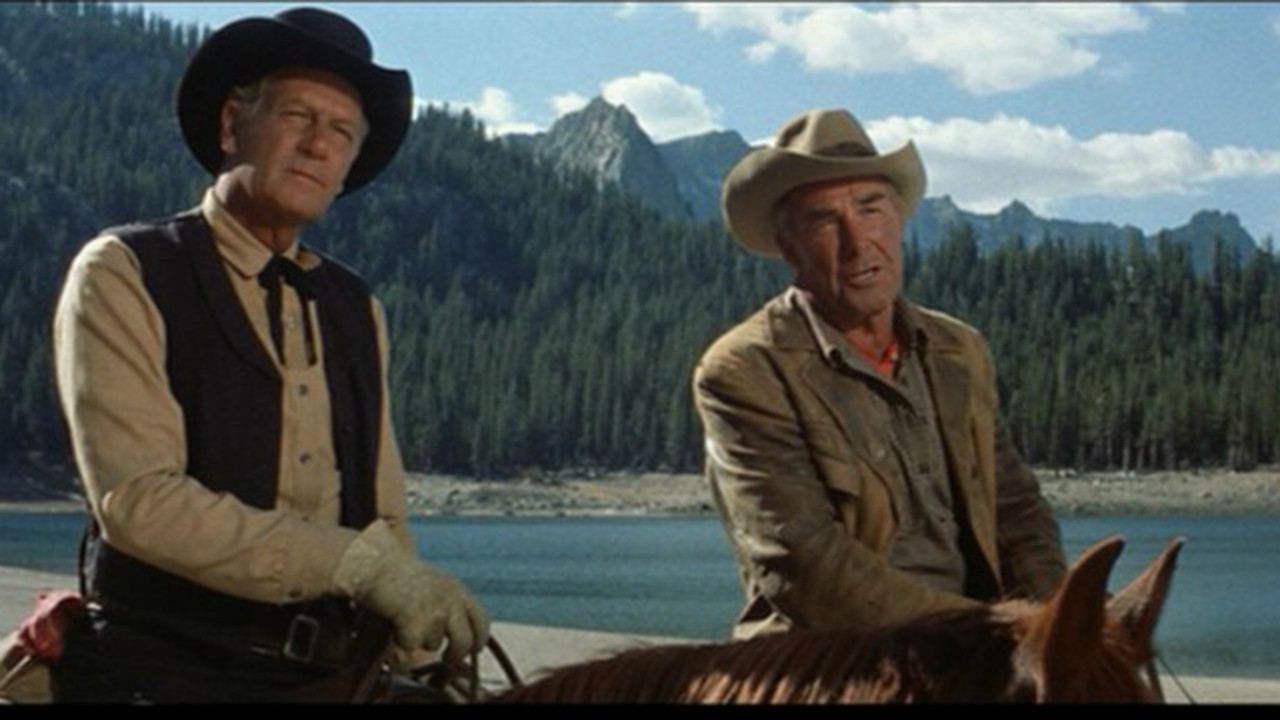 Here’s another Peckinpah film because Peckinpah was obsessed with issues of morality and betrayal. Randolph Scott had made a career of playing guys out west who wouldn’t think of wimping out. Good men. Men of integrity and humanity who could be tough when they needed to be. In this film Peckinpah brilliantly subverts the image that everyone brings to a Randolph Scott western. Scott plays Gil Westrum, a guy who had been honest his whole life and had nothing to show for it.

So why not take the gold he and his friend Steve Judd (Joel McCrea) are transporting? Judd thinks otherwise and is deeply hurt and astounded when his long time, trusted friend tries to double-cross him. Seeing Randolph Scott with his hands tied by a lawman is a tough sight to bear.

Type of wimp: similar to the Black Sox, but in this case I’d call Westrum a tragic wimp.

Lesson to be learned: keep your integrity until they drop you in a hole.

OK, I’m going for a third Peckinpah film here. David Sumner (Dustin Hoffman, in his greatest performance ever) is a mathematical genius who studies astro-physics. He has married the super-super-super sexy (oooh la la) Amy (Susan George). Basically, Sumner is SUCH a wimp that he has wimped out even before the film begins.

The film is set toward the end of the 60s and Sumner just isn’t interested in civil rights, women’s rights, ending the war…he’s into math. He’s doing OK, got a good job, lots of respect in academia. So he picks up and leaves the USA to go to the English village where Amy grew up to avoid all the moral stuff that’s happening in the USA. Problem? The working class guys in Amy’s village peg him for a wimp immediately. They taunt him, embarrass him and, ultimately, rape his wife, knowing he won’t do anything.

Indeed, Amy does not even tell him of the rape, knowing what a wimp he is. Of course, in the end, Sumner finds a moral issue to fight for, but Peckinpah seems to be asking whether this can cancel the years of pusillanimous behavior or whether this sudden moral crusade will change Sumner’s behavior.

Type of wimp: egocentric (I’m OK so the world’s OK).

Lesson to be learned: in your pursuit of success, don’t neglect your responsibilities toward others. No man is an island, baby. 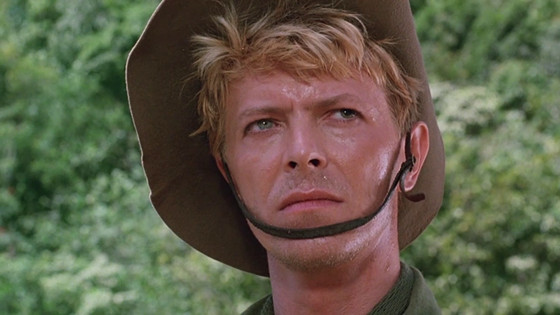 “Straight-for” Jack Celliers is the soldiers’ soldier. The Japanese capture him only because they threaten to kill hostages unless he surrenders. How can he be a wimp?

Well, when he was a student at an exclusive English public school, he abandoned his brother to a humiliating hazing ritual that psychologically damaged his brother for the rest of his life. Celliers could have stopped it with one word, but he didn’t. Now he is the super-soldier, trying to compensate for his earlier moral lapse.

Lesson to be learned: speak out, stop what’s wrong, there’s never the possibility for moral compensation.

Watch the beginning of this film carefully and you’ll discover that Taylor (Chuck Heston) is a wimp. Why has Taylor volunteered for this mission? He is fed up with the crime, the protests, all the unresolved mess that is happening on his planet. He wants to escape.

Paradoxically, he winds up in a new society that evolved/devolved because of people like him who wanted to escape instead of dealing with issues head-on.

Lesson to be learned: get involved. Do what you can. Do anything…try! 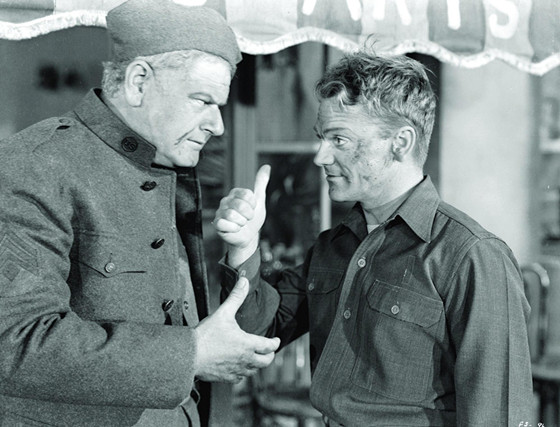 Jerry Plunkett (James Cagney) is a loud-mouth. He’s a tough guy. What is Father Duffy (Pat O’Brien) going to do with him? While all the other guys who recently joined the army are scared about what combat will be like, Plunkett chides them and boasts of what his exploits will be. Of course, in his first battle Plunkett falls apart and acts like a coward.

Later he seems to redeem himself, but there’s no doubt he spent too much time shooting his mouth off and then wimping out. A little moral fable made in Hollywood in 1940, perhaps preparing American men for the war that Roosevelt seemed to want so desperately.

Lesson to be learned: be humble, do your best.

Blame it on the dad. Well, maybe we should. Frank Stark (Jim Backus) is a henpecked husband who never shows any sense of family leadership or even the capacity to stand up for himself to his badgering wife. The implication in the film is that Frank could have averted any teenage angst felt by his son Jim (James Dean) by, basically, being a man and a strong husband.

Lesson to be learned: either dump her or stand up to her. 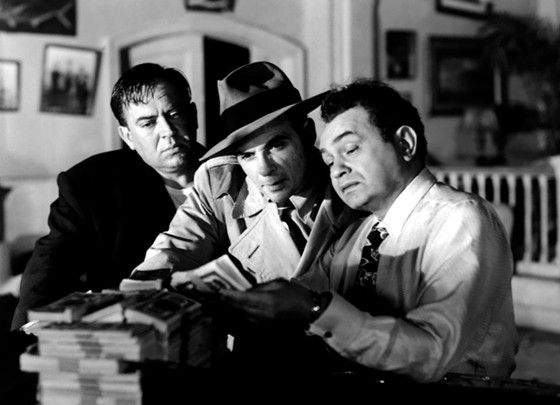 So tough to see Bogie as a wimp. Frank McCloud (Humphrey Bogart) was a big war hero. He decides to visit the dad of a friend of his who was killed in the war. When he goes to the hotel run by his best friend’s dad, he runs into some type of mafia guy who is also there for nefarious reasons. Although a war hero, he continually acts as a coward.

At one point he can, apparently, kill Johnny Rocco (Edward G. Robinson), but wimps out. Ultimately he makes amends and helps bust the entire corrupt gang. So was he wimping out or just playing for time? Looked like wimping out to me followed by a fortuitous happy ending.

Lesson to be learned: your reputation as a hero can haunt you. 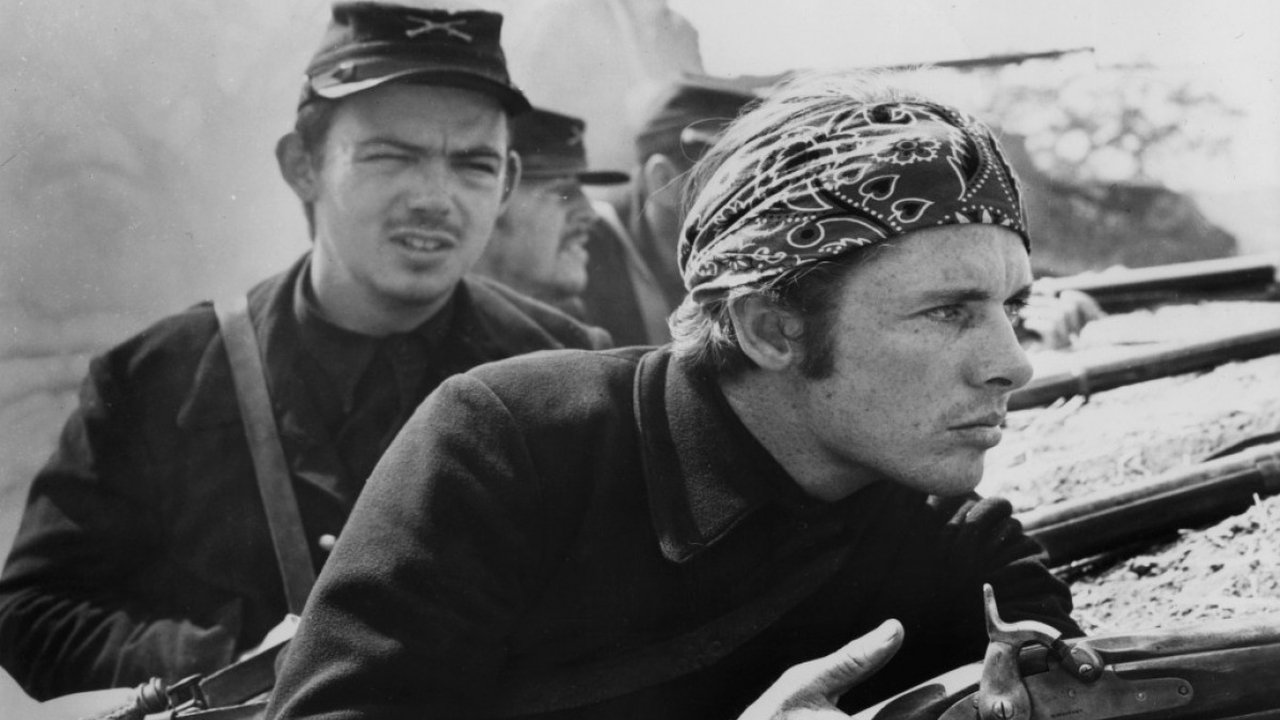 John Huston was a genius. In particular, he was a genius for casting Audie Murphy in this film about wimping out and redemption from wimping out. Who was Audie Murphy? Well, Murphy was only the greatest American hero in World War II. The guy won every possible medal for bravery there was. He got shot up by Nazis several times but never stopped fighting.

At one point he destroyed a German tank, jumped on top of it, took control of its machine gun, and began killing Nazis with it. In the annals of American warfare, it’s harder to find a guy less of a wimp than Murphy. Ok, let me please give this MAN his due: he was a TOUGH SON OF A BITCH. After World War II he was so popular he starred in several Hollywood films. So in this film he IRONICALLY plays a guy who wimps out and redeems himself later.

Lesson to be learned: it’s OK to be scared, do what you can. Thank you Murph, for your service. You kicked some nazi ass, baby. 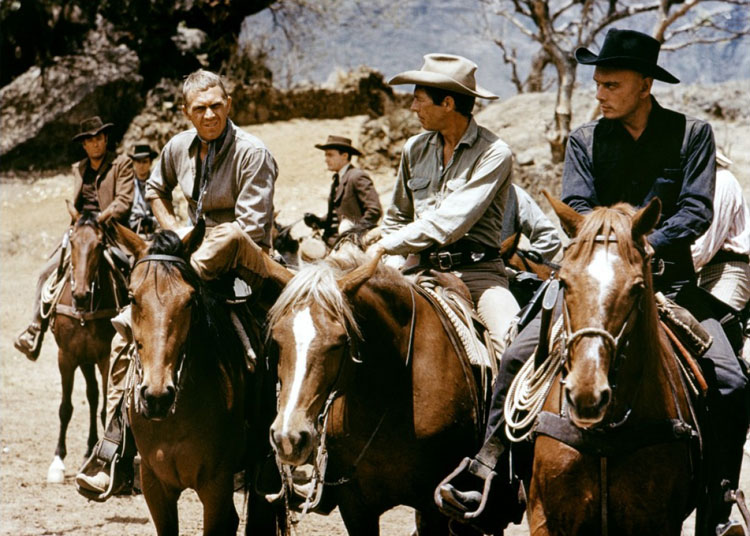 Lee (Robert Vaughn) seems to be the ultimate gunfighter among the group recruited to protect the Mexican village from banditos. But he’s got a secret. He’s turned yellow-bellied. He’s seen so many men die (at his hands) that he’s now scared. So he’s kind of a secret wimp throughout the film.

The other gun slingers never even realize the fear he lives with. At the end, however, when the chips are down, he comes through for his bunch and the villagers. He dies happy.

Type of wimp: temporary – he’ll pull himself out.

Lesson to be learned: if you become a wimp, be honest, recognize it, work through it.

Tom Newton (David Bowie) just needs to get some water back to his planet because his people are dying. He’s even willing to buy it. He’s a nice guy – everyone on his planet has evolved into nice guys/gals.

So what’s the problem? He’s betrayed by Dr. Nathan Bryce (Rip Torn) who learns Tom’s secret. Why can’t Bryce keep his mouth shut? Why does he have to, basically, expose a guy who just needs to help his people? Good question.

Lesson to be learned: help the guy, he just wants to save his planet!

Author Bio: Daniel Gauss is a graduate of Wisconsin and Columbia who teaches, tutors and writes about art in New York City. His paper on Peckinpah’s ethical orientation can be accessed here: https://www.academia.edu/8322290/Peckinpah_s_Groundless_Ground_of_Ethics_in_the_Wild_Bunch.