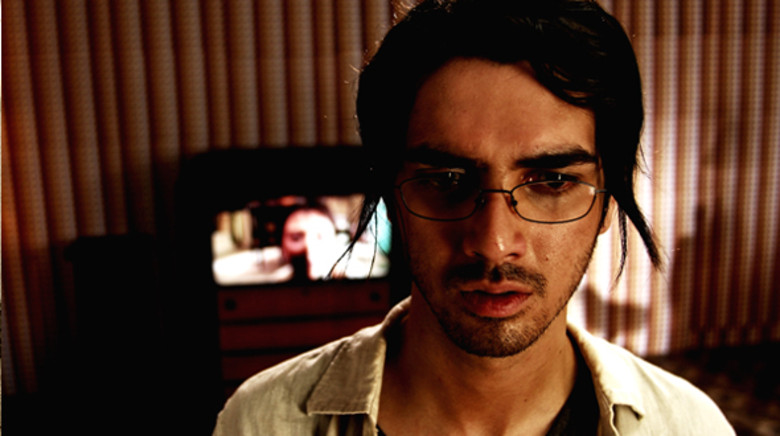 Gambir is a famous sculptor. He exclusively creates black statues of pregnant women. He appears to have it all, money, fame, a beautiful wife, Talyda, and two brotherly friends, Rio and Dandung,who are absolutely loyal.

The sole thing that is missing is a child, and his mother is constantly nagging him to try harder to produce one. While everything in his life seem normal, as the film progresses, strange things start happening and a few mysteries are revealed.

What is concealed inside the belly of his statues? Who is sending him messages begging for help? What is hidden beyond the red door in the basement of his house and why Talyda does not wish him to go in the room? What is the role of the Herosase company in it all?

Joko Anwar, who also wrote the script, directs an artistic and grotesque film based on the homonymous novel of Sekar Ayu Asmar. It keeps the interest of the spectator undiminished through constant disclosures and turnarounds. The film reaches its climax during ascene at a dinner table, which is absolutely magnificent.

Anwar is a former journalist and film critic and Forbidden Door is his biggest success to date. The film was the winner of the Best of Puchon Award at the 2009 Puchon International Fantastic Film Festival, it was screened in festivals in the UK, Canada, Spain, Netherlands, USA, etc and gained favorable reviews from Time magazine and Hollywood Reporter among others. 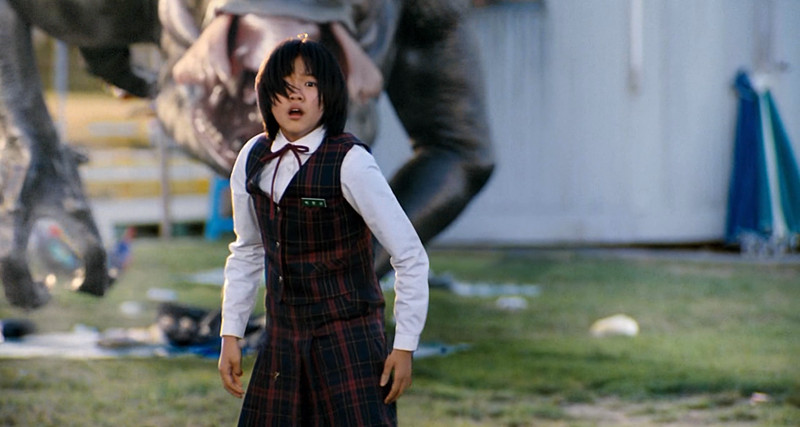 An American scientist forces his Korean assistant to dispose chemical wastes in the river Han. Six years later, a humongous monster rises from the waters, terrorizing the unsuspecting citizens of Seoul with its intent to kill. Seemingly, among the victims, is ten year old Hyun Seo, daughter of snack bar owner Park Gang Du.

Later though, the father receives a phone call from the little girl, who is not dead, but has been kidnapped by the monster and is presently located somewhere in the sewers. He, his sister and two regulars of the bar decide to go to her rescue.

Bong Joon Ho directs the film in a way similar to a Hollywood blockbuster with a lot of chase and action scenes. Beyond all of the special effects lurks a social commentary, which is exemplified by the Parks, a broken family without any kind of ethical or family values. The members are totally influenced by the Americanization of Korean society. The monster and his actions are a visualization of the director’s conception of where this trend will lead.

Inspired in part by a 2000 incident, in which a Korean mortician, working for the U.S. military in Seoul, dumped a large amount of toxic waste in the sewers, The Host was one of the few South Korean films celebrated in the North, chiefly because of its critique of the US Army.

The director, Bong Joon Ho made the transition to Hollywood with Snowpiercer, in which the lead of The Host, Kang Ho Song, also appears. Doona Bae, who plays Park Gang Du’s sister, played a small part in Jupiter Ascending and is currently one of the leads in the TV series Sense8.

The film, following the success of director’s previous work, Memories of Murder, secured a budget of 10 billion won (roughly 8.5 million dollars), a huge amount for the local film industry at the time and it opened on a record number of screens. As a result, by the end of its run, it had sold over 13 million tickets, being, at the time, the highest grossing Korean film up to that date.

The film premiered at the Cannes Film Festival and was released all over the world including a limited release in the US. It received four Blue Dragon Awards and two Grand Bell Awards, from the two most important festivals in Korea. A 3D sequel has been announced and Universal has bought the rights for an American remake.

The script of the film is loosely based on the novel Therese Raquin by Emile Zola.

Sang Hyon is a Christian cleric, who is widely known for his piety and kindness. When he can spare time, he volunteers in the local hospital, where he offers guidance and blessings to the patients. This activity of his and its inevitable association with suffering, sometimes dying, individuals, has led him to depression.

In a lot of these cases, he doesn’t discern any hope at all. Driven by this fact, he decides to volunteer for research that hopes of developing a vaccine for an incurable illness. During the tests, Sang Hyun is infected and is forced to receive a blood transplant.

At that point, the virus seems to be in remission and Sang Hyon is worshiped as a saint by his congregation, since he is the sole survivor among five hundred individuals. What they don’t know is that the cleric has actually turned into a vampire.

A lot of people come to him, expecting a miracle and among them is a childhood friend, Kang Woo. Later on, he invites the clergyman to his house. He lives there with his overprotective mother, Lady Ra and his wife, Tae Ju. San Hyon is drawn to the young lady instantly, a feeling which appears to be mutual. This attraction, along with his constant quest for blood will lead the priest far from his faith, straight into a life of sin.

Park Chan Wook centers around two conflicting points: These include the sense of Catholic guilt and desire, both of which are visualized by Sang Hyun, who is faithful enough to stand against death, in order to help his fellow human beings. On the other hand, he cannot resist the lust he feels for the beautiful, miserable Tae Ju. He fails to prevent his congregation from mistaking his vampirism for Holy Grace. At the same time, he drowns in his guilt from having committed a mortal sin.

Park, who is widely known for the internationally acclaimed Trilogy of Revenge (Sympathy for Mr. Vengeance, Oldboy, Sympathy for Lady Vengeance) has now made the transition to Hollywood with Stoker. In the leading role is Song Kang Ho, probably the best Korean actor of his generation, who is amazing in his role. Thirst was screened in festivals around the world and won the Jury Prize at the 2009 Cannes Film Festival. 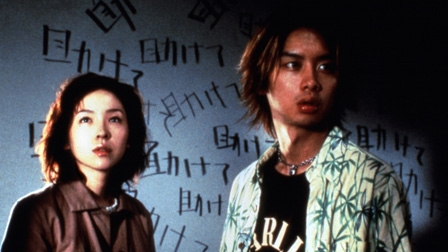 The script of the movie consists of two simultaneously unreeling stories.

In the first one, four friends, Kudo Michi, Sasano Junko, Toshio Yabe and Taguchi are employed in a greenhouse. The latter, who is working on a computer program, suddenly disappears. Michi finds himin his apartment. However, his demeanor is quite distant. When she looks into the next room, she finds Taguchi hanging and realizes that what she saw earlier was his ghost. Investigating the reason for his suicide, the remaining three friends decide to examine his program.

In the second story, Ryosuke Kawashima, an economics student surfs the Internet for the first time. When he does, his computer automatically directs him to a web page which shows photos of individuals sitting in dark rooms.

A bit later on, a message appears on the screen stating “Do you want to meet a ghost?”. Terrified, he switches off the computer. That same night, he realizes that the computer is connected to the same page again. The next day he visits the computer science department of his university, where the person in charge, Harue Karasawa, shows him a way to save the page, in order for it to be checked out.

There is a definite allegorical element in the film regarding the alienation of individuals in an urban environment, leading to depression and suicide, specifically in Japan. The director, Kiyoshi Kurosawa, presents his trademark style“slow-paced terror”, which has its roots in The Ring, but ultimately goes in a direction towards social drama, in an allegorical sense, creating a totally different film.

Another trademark of the director’s style is the fact that the first concern of his movies is the atmosphere and not the acting. That considered, the cast does well, especially Kumiko Aso as Kudo.

Pulse established the director Kiyoshi Kurosawa as one of the masters of the J-Horror genre and is considered as one of the scariest films ever made. It was screened in festivals all over the world, including Cannes and in 2006 an American remake with the same title premiered in the US, later spawning two sequels. 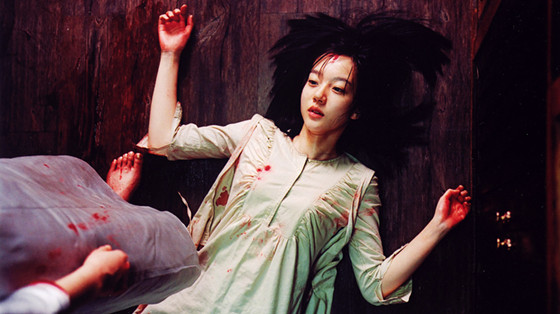 Two sisters, the older Su Mi and the younger Su Yeong, arrive at their new home in the country along with their stepmother, Eun Joo and their father Moo Hyeon. Each of the girls appears to harbor a deep dislike of their stepmother, while, at the same time suffering from the absence of their mother.

The first sign that something is amiss, is manifest during a family dinner, when, after an intense fight, Su Mi seems to snap and her father provides her with two . From that point on, the story seems to take a turn towards the supernatural, concerning the nightmares of the two sisters.

Kim Jee Woon, the film’s director, takes the classic Korean folktale, Janghwa Hongryeon Jeon (The Story of Janghwa and Hongryeon) and transforms it to a modern, urban horror film. In the most explicit way, the film primarily brings into focus the relationship between the two sisters and their stepmother. Equally impressive is his use of colors within the settings, a technique which intensifies a sense of agony and terror.

The three female leads, Im Soo Jung as Su Mi, Moon Geun Young as Su Yeong and Jung Ah Yum as Eun Joo, perform sublimely and are actually the ones who make the film so special, along with the cinematography and the direction.

Kim, one of the most successful Korean filmmakers, recently made the transition to Hollywood with The Last Stand. Both of the leading actresses went on to become stars in their country. A Tale of Two Sisters is one of the highest grossing horror films in the history of the Korean film industry and the first of its genre to screen in the US. It was shown in festivals all over the world netting awards and in 2009 was remade into the US film, The Uninvited.